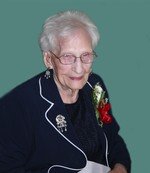 Please share a memory of Helen to include in a keepsake book for family and friends.
View Tribute Book
Helen died peacefully at her home in Birch Cottage, Bethany Meadows, Camrose on August 24, 2008 at the age of ninety-five. Helen was born on the farm February 13, 1913 to Henrietta and Rasmus Pederson who farmed near Broderick, SK. She was baptized and confirmed in Green Valley Lutheran Church near Broderick. In 1937 she married Rev. Jofred Dahle, and together they served parishes in Watrous and Prince Albert, SK; Port Arthur, ON; Saskatoon, SK; and North Surrey, BC. After Pastor Dahle's death in 1966 she worked at the Lutheran Sunset Home in Saskatoon, first as a health care aide and then as Activities Director. She married Carlyle Karstad in 1971; they enjoyed ten years together before his death in 1981. Helen is survived by one brother: Earl (Betty) Pederson of Fairmont Hot Springs, BC; two sisters-in-law: Judith Pederson and Evelyn Pederson of Outlook; four children: Arlene (Ken) Skriver of Camrose; Carol (Herman) Hagen of Abbotsford; David (Darlene) Dahle of Camrose; Gerald (Dawn) Dahle of Maple Ridge, BC; three step-children: Bernard (Shirley) Karstad of Saskatoon, Berniece (Paul) Ogryzlo of Saskatoon, Beatrice (Walter) Lukye of Estevan; fourteen grandchildren: Helen (Rick) Cabot of Beiseker, Donald Skriver of Edmonton, Steven Hagen of Toronto, Marcia Hagen of Abbotsford, Andreas Dahle (Carrie Taylor) of Edmonton, Kristin (Lenin) Flores of Airdrie, Krista (Derrick) Chung of Richmond, BC, Jodi Dahle of Maple Ridge, Brent (Wendy) Karstad of Air Ronge, SK, Tim (Carla) Ogryzlo of Calgary, Stephanie (Csaba) Barabas of Black Diamond, AB, Heidi, Jeremy, and Jeffery (Keri) Lukye of Estevan; ten great-grandchildren: Kaitlyn of Beiseker; Amir of Maple Ridge; Seth, Benjamin, and Isaac of Air Ronge; Samuel and Gabrielle of Calgary; Sophia, Emma, and Maya of Estevan; and numerous nieces, nephews, and cousins. She was predeceased by four brothers: Otis, Kenneth, Arthur, and Leif Pederson; three brothers-in-law: Rudy Dahle, Oliver Mellor, and Arthur Matson; four sisters-in-law: Selma Pederson, Anne-Marie Dahle, Frieda Mellor, and Hedvig Matson; husbands Jofred Dahle and Carlyle Karstad; one stepdaughter-in-law Sylvia Karstad, and one stepson Bertram Karstad. Funeral services will be held on Thursday, August 28, 2008 at 2:00 p.m. from Messiah Lutheran Church with Rev. David Eriksson officiating. Inurnment will take place in Surrey, B.C. at a later date. If friends so desire memorial contributons may be made in memory of Helen to Messiah Lutheran Church, Augustana's Chaplaincy Program or a Charity of One's Choice.

A Memorial Tree was planted for Helen
We are deeply sorry for your loss ~ the staff at Burgar Funeral Home Camrose Ltd.
Join in honoring their life - plant a memorial tree
Online Memory & Photo Sharing Event
Online Event
About this Event

Share Your Memory of
Helen
Upload Your Memory View All Memories
Be the first to upload a memory!
Share A Memory
Plant a Tree