Over 110 Years of Dedicated Service

Burgar Funeral Home was started by Hiram Burgar in the back of his hardware store in 1906 - one of the first businesses in the Camrose community. After two years, his partner, Mr. Wallace withdrew from the business and his interest was taken over by Mr. Davidson, and was renamed Burgar, Davidson and company Hardware. When Davidson left the business in 1911, Burgar took over as the sole owner and in the same year Hiram and Maude (Wilson) were married. Three children were born in this union - Helen, Roderick and Doliena. 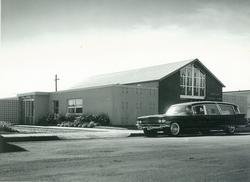 In 1917, Hiram sold his hardware store to concentrate full time on his funeral business. It was about this time that he moved the business to its present location.

When Hiram passed away in 1949, Rod and his wife Marg (Margaret) were left to manage the business. In 1959, Alver Person joined Rod Burgar and was employed at the time construction took place for the new Funeral Home.

In 1962, the sudden passing of Rod Burgar was a great shock to the community. His funeral service was one of the first to be held after the new building was dedicated just two weeks prior to his untimely death.

Alver Person and Marg Burgar managed the business for the next few years, and in 1965, Alver purchased the business. The firm name was then changed to Burgar Funeral Home Camrose Ltd., as it remains today.

Roger Erickson joined the firm and, in 1967 when he left to pursue other endeavors, Rod Madison began his career in the funeral service. Burgar Funeral Home was involved in the ambulance service from the very early years until 1971 when the City of Camrose assumed the responsibility.

In the early 70’s Burgar Funeral Home purchased the laundromat property to the west and added on to the facility. In 1979, the well-established Daysland Funeral Home was purchased by Burgar’s. Bob Hanrahan, as manager, has been associated with that funeral home for more than 50 years.

Reg Madison, Joe Schulte, Alver’s son-in-law Steve Haugen, John Person, and Cam Parker later joined the business. In 1995 Burgar Funeral Home added a crematorium as well as a side foyer and office. In 1998 the monument display area was also added.

Burgar Funeral Home is currently operated by Bart Orr and a competent staff of caring, compassionate individuals who have great pride in the long Burgar History. All of us who have been involved with Burgar Funeral Home consider it a real privilege and honor to have served and guided the families of Camrose, Daysland and area for more than 110 years.