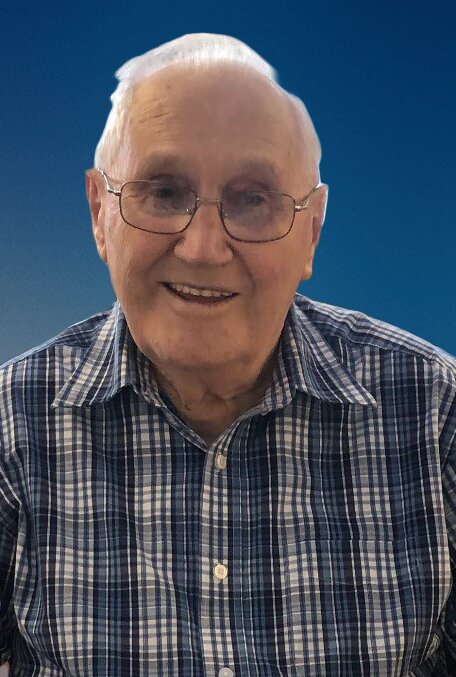 Ross passed away peacefully at Louise Jensen Care Centre in Camrose, Alberta on January 8, 2023, at the age of 92 – 4 days shy of his 93rd birthday.  He was born in Provost, Alberta to parents John and Genevieve (Wandler) Heck.  He was the third eldest of seven children.

Ross married Eileen Zimmer on July 6th, 1963.  He and Eileen eventually settled in Daysland, Alberta in the fall of 1970 when he opened Daysland Clothing and the bottle depot soon thereafter.  Through the ’60s, ’70s, and 80’s Ross and Eileen raised their five children. In 1995, at the age of 65, Ross closed the clothing store and retired.  Ross was an active member of his community.  He was a volunteer fire-fighter, ambulance driver and was a member of the Lion’s Club for many years.

Ross’ greatest joys were his grandchildren and great-grandchildren.  He and mom never missed a grandchild’s hockey game, dance recital, or any other sporting events.  Ross loved playing cards and billiards with his family and friends.  If you couldn’t find him at home you would be sure to find him at the Drop-in playing cards, floor curling or at the pool hall playing billiards.  Ross also loved music.  He loved to play the piano and accordion and singing for his family and friends.  And he always played by ear – he never read a note of music.  Dad loved sports.  If the Oilers or Blue Jays were playing Dad was in front of the TV.

Eileen passed away in 2011, and then in July of 2014, Ross sold their home and moved into Providence Place in Daysland.  He resided there for seven years, but he was rarely in his room because he was out socializing or playing cards.  When his health deteriorated in October 2021 he moved to Louise Jansen in Camrose.  The last few years of his life were difficult as dementia and age ravished his body.

If family and friends so desire, memorial contributions in Ross's memory may be made to the Sunbeam Drop in Centre-Daysland, Daysland Cemetery, or to the Daysland Hospital Foundation.

Share Your Memory of
Ross
Upload Your Memory View All Memories
Be the first to upload a memory!
Share A Memory
Plant a Tree