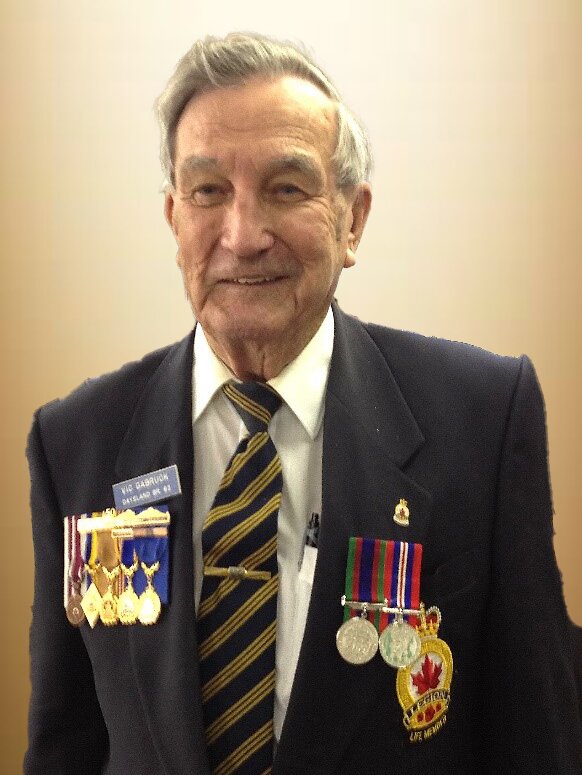 Victor John Gabruck of Daysland, Alberta, passed away on Sunday, September 18, 2022 at the age of 100 years.

Victor John Gabruck was born March 12, 1922 in Hardisty Alberta to Bill and Mary Gabruck.  He was the second oldest of eight children.  As a child he lived on a farm in Hardisty before moving to various farmsteads in the Daysland Area.

He often talked about the tough times through the depression for his parents and his siblings.  In August of 1941 Victor was drafted and he joined the Airforce as an airframe mechanic.   Victor was stationed in St. Thomas Ontario, Claresholm and Edmonton.   It was during one of his leaves from the Air Force that we met Phyllis Hartman, a beautiful blue-eyed lady at the egg grading station in Daysland.  They were married June 12, 1946 and purchased a quarter of land North of Daysland and started farming.

They were blessed with three children, Sharon, Lynda, and Lori.  Vic was very pleased that all three girls also loved to tend to the animals and work in the fields.  He spoke often of their first dog Bing.

Upon retiring from farming in 1980 they moved to Daysland where they purchased a house and he started working over a period of 10 years for the Alberta Hail & Crop Insurance selling crop insurance and assessing hail damage.  Victor truly loved this job, as he spent time travelling Alberta, talking to the farmers and sharing drinks with the boys after work.  Over a ten year span, they would spend a month each year travelling to Arizona with friends that both Vic and Phyllis enjoyed.

They later moved to Providence Place which Vic eventually learned to love and enjoyed spending time with his friends.  He loved playing crib and visiting with his fellow comrades at the Daysland Legion.  Victor was a very caring and unique individual.  He made his own set of rules and definitely walked on his own path.

Victor was predeceased by his wife Phyllis; parents William and Mary Gabruck; brothers Stan, Peter, and John; and sisters Helen and Ann.

If family and friends so desire, memorial contributions in Victor's memory may be made to the Canadian Cancer Society, Providence Place in Daysland,  or the Royal Canadian Legion Daysland.

Share Your Memory of
Vic
Upload Your Memory View All Memories
Be the first to upload a memory!
Share A Memory
Plant a Tree