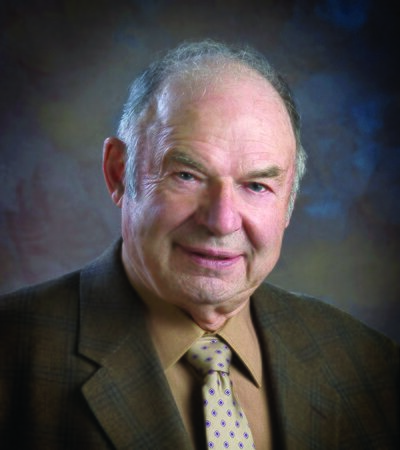 Ken Drever was born the first son of Cyril and Marguerite Drever. He grew up on the family farm southwest of Hardisty and attended Crickle Dale school until high school, which was in Hardisty. While attending high school, he worked a janitorial job, giving him his first income. He invested that income into the local CIBC bank. They were impressed with that and gave him a job after graduating from high school.  It wasn’t long before he was driving trucks in his spare time and was then offered a job with Herb Bricker at the local BA Oil Bulk station. In 1954, Ken had the opportunity to take over the business, and with help from his uncle, Dick Drever, he was able to do that. He always remembered the help he received and in turn, helped many other young men get started in their business ventures.

As time went on, Ken made the wise decision to purchase a quarter of land instead of a motorbike. That started his “farming on the side career”.  Time turned up other quarters to purchase. On August 19, 1952, Ken married Iris Creasy. To this union, 5 children were born. Lynn, Judy, Victoria, Cliff, and Dale. Family was very important to Ken and Iris.  As the bulk business expanded to Camrose in 1965, Ken decided to move the family there and he travelled the highway between the two places.

Ken was always a very community-minded person. In Hardisty, he was on the Town Council and a member of the Shriners, Masons, and the United Church.  In Camrose, he continued with these organizations plus joined the Rotary Club and the Chamber of Commerce. Ken was well known for stepping to the front of the line with both his time and financial support. Ken was one of the original members of the Battle River Community Foundation board of directors and one of the first donors. He helped on the board and established many new funds over the next 25 years. Ken was instrumental in getting the CRE on its feet. He taught his family, and anyone who would listen, the importance of giving back to your community.

A Funeral Service was held at 2:00 p.m., Saturday, September 3, 2022, from the CityLights Church, 4920 48 Street Camrose with Rev. Brian Hunter officiating. The service recording is accessible at the following link: https://www.youtube.com/watch?v=zrtHx28dtCk.

If family and friends so desire, memorial contributions in Ken's memory may be made to Battle River Community Foundation, or to the charity of one's choice.

Share Your Memory of
Ken
Upload Your Memory View All Memories
Be the first to upload a memory!
Share A Memory
Plant a Tree