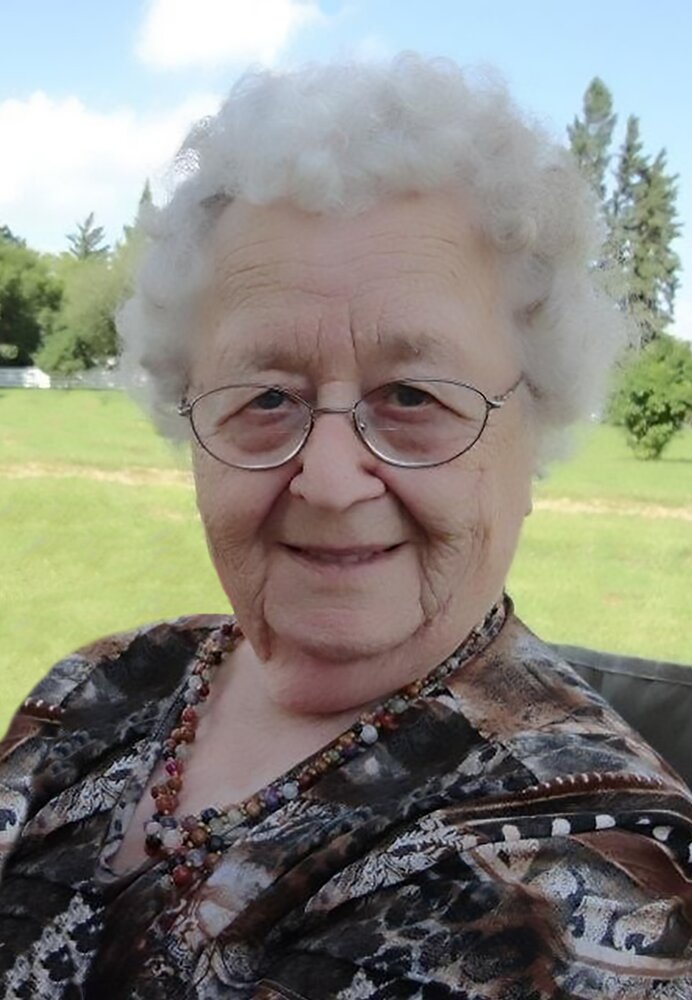 Please share a memory of Mildred to include in a keepsake book for family and friends.
View Tribute Book

Mildred Christine Bjorgum of Camrose, AB, formerly of Kingman, AB, passed away on Saturday, August 6, 2022, at the age of 95 years.

Mildred (nee Lyseng) Bjorgum was born in the Armena District to Emil and Martha Lyseng. Mildred was baptized and confirmed at Scandia Lutheran Church. Norwegian was spoken in the home and Mildred did not learn English until she began school. Throughout her life, she was very proud of her Norwegian ancestry. She was schooled at the one room Lyseng schoolhouse located near the family farm. She enjoyed the music often played in her house by her fiddle playing father, and she also became an accomplished piano player. Checkers was also a favourite pastime, and she willingly humbled many challengers.  Mildred continued her post secondary education in Camrose at the Canadian Lutheran Bible College. Lloyd and Mildred were married in Armena on August 14, 1948. They lived on the Bjorgum family farm, near Kingman. Their marriage was blessed with six children. Mildred always remained active in her church; playing music, and often taking on administrative positions such as church treasurer.

In 1980, after more than thirty years of farming, Lloyd and Mildred moved to Rosebud for eighteen years where they made many friends. She became the Canada Postmaster in Rosebud, and enjoyed the many acquaintances she met there. Mildred was quickly well known in their new community, and again became very active in the Community Church. She also was well known for her knitting, crocheting, sewing, baking, jam and syrup making. Lloyd and Mildred often had their grandchildren staying with them during the summer holidays. The grandkids have many happy memories of their grandparents. The couple returned to Camrose in 1998.

Mildred remained active in Rosealta where she would often play the organ before the noon meal, play for visiting church singing groups, and for memorial services.
Family was always important to Mildred and she took great joy in her children, grandchildren, brothers, sisters, nephews, nieces, and all of the “outlaws”.
Mildred was predeceased by her husband Lloyd; her sisters Elsie and Luella; brothers Richard and Arthur; three nephews; and one niece. She will be missed by her brother Wilbert Lyseng.

Mildred lived her life with love for her family, charity for those less fortunate, a song in her heart, and Christian faith.

If family and friends so desire, memorial contributions in Mildred's memory may be made to the Canadian Lutheran Bible Institute, the Camrose Community Church, or to the charity of one's choice.

A Celebration of Life and Fellowship

Share Your Memory of
Mildred
Upload Your Memory View All Memories
Be the first to upload a memory!
Share A Memory
Plant a Tree