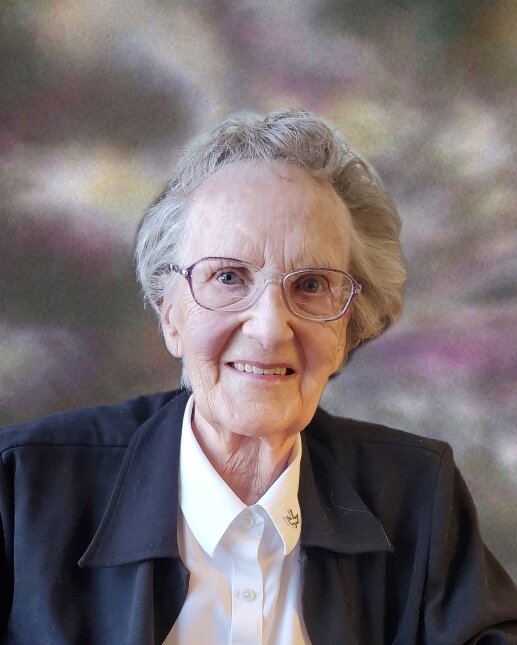 Sally Carolyn Hartwick of Camrose, Alberta, formerly of Daysland, passed away peacefully at Seasons on Wednesday, March 23, 2022 at the age of 96 years, one week shy of her ninety-seventh birthday.

Sally married Elzear October 18, 1945 and they were blessed with three children, seven grandchildren and nine great-grandchildren.

Sally was ever loyal and lovingly grateful to her husband, her children, their spouses, grandchildren and great-grandchildren. Her home was ever welcoming to family and friends. Sally was a wonderful homemaker her meals were delicious her home meticulously kept and to all who popped in. There was always a welcoming and entertaining visit.

Sally often imparted her support and wisdom through thoughtful sayings and poetry. Many great reads were handed to her guests. Often her reading, poetry, or sharing of many treasures was imparted. Her china and crystal collections were special to her and showed her elegance and appreciation of treasures.

Sally worked for many years at the Daysland pharmacy and was a loyal, knowledgeable and kind to everyone. While working she amassed a large following of friends. Ever supportive of her church and community, at this, she was known as a willing worker.

During the last five years at Seasons, she continued to gather many friends. She was a devout Catholic often saying a few extra rosaries to special people.

We located her kind wisdom shared at the passing of her niece:

Just like a sunbeam brightens the sky,
A smile on the face of a passerby,
Can make a drab and crowded street,
A pleasant place where two smiles meet.

Yes, yes, her wisdom will be missed.

A Funeral Mass was held at Our Lady of the Prairies Roman Catholic Church in Daysland.

If family and friends so desire, memorial contributions in Sally's memory may be made to the Stollery Children's Hospital Foundation.

Share Your Memory of
Sally
Upload Your Memory View All Memories
Be the first to upload a memory!
Share A Memory
Plant a Tree