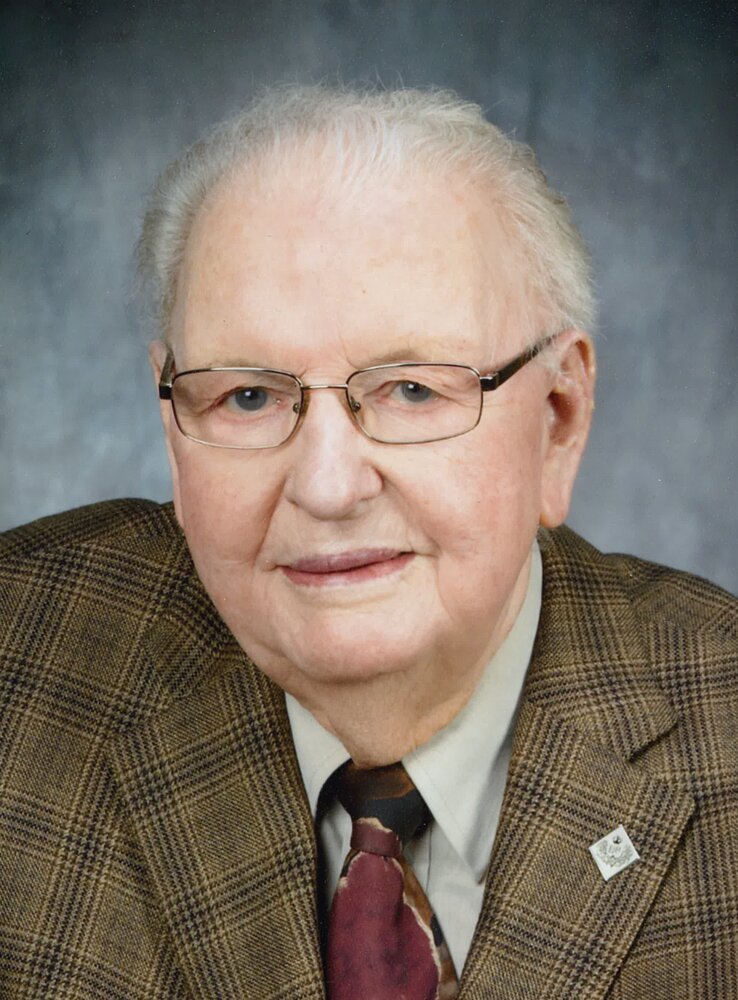 Please share a memory of Robert to include in a keepsake book for family and friends.
View Tribute Book

Robert (Bob) William Hanrahan was born on October 12, 1925. He grew up in Daysland under the watchful eye of his parents, Bill and Ann Hanrahan. Bob lived a life full of sports, travel, and time with family and friends, until his passing on March 6, 2022, which was the same day as Norma’s birthday.

Bob did his schooling in Daysland, and he worked in the Post Office alongside his dad, who was the Postmaster. When WW2 broke out, Bob enlisted in the Navy and was sent to Quebec, where he served in the military post office. After he was discharged, he returned to Daysland. When his dad retired in 1956, he became the new Postmaster. On February 23, 1949, he married Norma Kvittem and that loving relationship lasted for fifty-eight years, until Norma’s passing in 2007.

In 1958 Bob and Norma welcomed their first son, Jim into their home, and the family became complete with the arrival of their second son David in 1961. They resided in the living quarters above the post office until Bob’s parents passed away in 1971. They then moved to the family home where Bob lived until 2019.

Throughout his lifetime, Bob was very active in the community. He played a pivotal part in rebuilding the golf course in 1949, spent forty-eight years with the fire department, and nineteen years as Chief; helped to organize the ambulance service and drove for twenty years; had been a Legion member for over seventy years; was a lifetime member of the Curling Club; was a town councilor and served as a funeral director for over seventy years, having started at the ripe old age of sixteen!! He was honored in 2011 at a DaysArts concert for his long-time service to the community. In 2012 he was awarded the Queen’s Diamond Jubilee Medal for significant contributions to his community and country. These are only some of the achievements he attained during his lifetime. He remained active with several organizations well into his eighties.

Bob started playing hockey with the Daysland Northstars at age fourteen and continued for twenty-five years. He finished his hockey career playing with the Camrose Maroons and the Goodtimers. He was honored by the Northstars when they retired his #10 jersey. Even after his hockey days were done, he continued to skate and also floor curled at the Sunbeam Centre in his eighties.

In 2019 Bob made the decision to sell his home and move to Providence Place. He had nothing but good things to say about his new home, especially the staff and the food! Then, in October of 2021, his health declined and he spent four months in the Daysland Hospital, where both he and his family so appreciated the care and compassion he received from the staff. He moved to Bethany Meadows on March 2, 2022 but sadly, just as he was settling in, he passed away a few days later.

Bob was a strong, kind, steady presence in the lives of his family and will be sorely missed. He was such an important part of birthdays, reunions, weddings, and our daily lives. We were so lucky to have him with us for so many years.

A Funeral Service was held at 11:00 a.m., Thursday, March 10, 2022, from the Our Lady of the Prairies Roman Catholic Church, 5202 59 St Daysland officiated by the Rev. Brian Hunter.  Interment has taken place in the Daysland Cemetery.

If family and friends so desire, memorial contributions in Bob's memory may be made to the Daysland Hospital Foundation, or to Daysland Providence Place, or to the charity of one's choice.