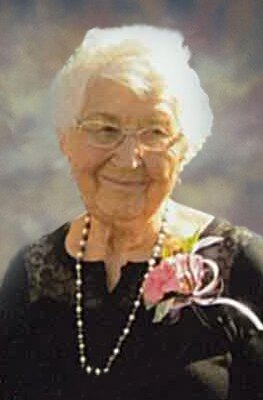 Please share a memory of Olga to include in a keepsake book for family and friends.
View Tribute Book

Ollie was born in Lamont, AB on December 29, 1928. She grew up in Wostok, AB in a family with three sisters and one brother. Her father passed at an early age and Ollie, being the eldest, helped her mother with managing affairs and raising her siblings.

Ollie moved to Edmonton at seventeen and took stenography at Alberta College. She met the boy next door, Armin, whom she married on September 16, 1950. They started their family in Edmonton and had four children, Jerry, Janice, Lisa, and Merissa. They moved to Camrose in 1961 and co-managed the Alice Hotel until Armin’s passing in 1995.
Ollie had an artistic nature and was avidly involved with weaving, knitting, sewing, and of course cooking. They were her favorite hobbies. The place she loved the most was the cabin. Ollie and Armin built it together as a refuge where many joyful years were spent with her children, grandchildren, and great-grandchildren. Never a conversation went by without her asking about each and every one of them and wanting to know when they were coming to the lake to visit. Ollie always made sure everyone had plenty to eat and drink and was warm and happy. She will be remembered dearly for her kindness, compassion, and her fun and gentle nature. We will miss her greatly.

Left to cherish her memory are her daughters Janice Harms of Victoria, BC, Lisa (Randy) Clarkson of Sherwood Park, and Merissa Steier (Steeve Paradis) of Edmonton; six grandchildren; six great-grandchildren; and sister Ruth (Roy) McLeod of Portland, Oregon. Ollie was predeceased by her husband Armin; son Jerry; two sisters; and one brother.

A graveside service was held at 2:00 p.m, Tuesday, November 2, 2021, from the Camrose Valleyview Cemetery, 4205 - 52 Street Camrose with the Rev. Brian Hunter officiating.

If family and friends so desire, memorial contributions in Ollie's memory may be made to the Camrose United Church.

Share Your Memory of
Olga
Upload Your Memory View All Memories
Be the first to upload a memory!
Share A Memory
Plant a Tree