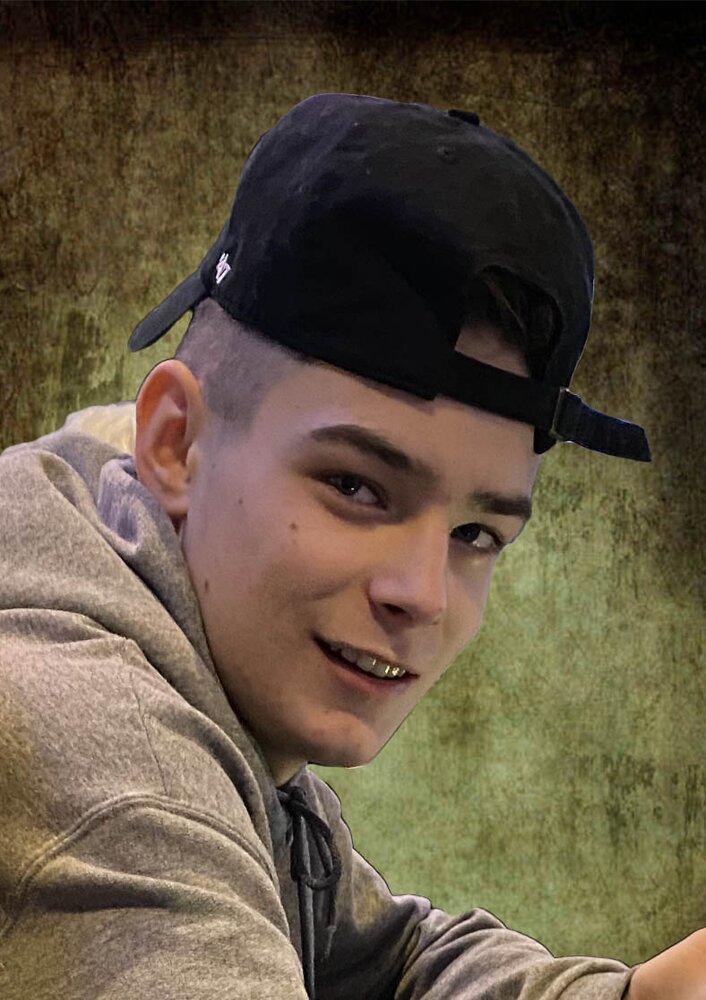 Please share a memory of Wyatt to include in a keepsake book for family and friends.
View Tribute Book

It is with deep sorrow that we announce the passing of our beloved son, Wyatt Falk of Camrose, Alberta. Wyatt sadly passed away on Friday, October 8th at the age of 17. He was a son, brother, cousin, nephew, friend, and teammate to many.

Wyatt attended Kindergarten at Chester Ronning, Grades 1-5 at Sifton, Grades 6-8 at CKS, and Grades 9-12 at ECCHS.

Through his school years, Wyatt was always the class clown providing humour to the teachers and classmates. However, some antics did result in Wyatt being sent to the principal’s office.
At Wyatt’s teacher interviews, many of his teachers referred to him as a bright spot in their classroom. He had a vibrant personality that was very contagious and an unforgettable laugh.
Wyatt was very athletic, some of the recreational sports he was involved in throughout the different stages in his life included basketball, volleyball, badminton, football, baseball, can skate, and soccer. Soccer trumped them all, where he pursued it competitively and his love for the game was very evident. Soccer flowed through his veins, where he lived, slept, and breathed the game.
Wyatt’s true talent was a defender on the pitch. Wyatt started playing soccer at the age of 5. He played for both Camrose and Wetaskiwin communities, then went on to play T3 with the Sherwood Park Phoenix team and T1 with the Edmonton Scottish United team. He was often referred to as a beast on the field by his teammates, coaches, and the parents with whom he formed many great relationships. The memories from these teams will last forever.

After every soccer game, Wyatt gave credit to his teammates for a win and took on the whole team’s burden for a loss. His mom encouraged him that a win and loss was the whole team’s responsibility, but Wyatt never perceived it that way which made him a humble and astounding team player.

A true friend, the life of the party, fun, and uplifting was how his friends and peers described him. He enjoyed cruising around town, going on road trips, and just hanging out with his friends. Recently, Wyatt and his buddies got gym memberships where he was proud to show his progress and the “pipes” he developed.

Ebony and Wyatt were only 15 months apart, and so they shared a special bond where their relationship was inseparable.

During Covid, Wyatt spent a lot of time with Danaya where they’d go out to the barn to wrangle wild ponies, play with Vinny, ride Zamira, and make TikTok videos. He was Danaya’s “down to do anything” partner.

Carl and Wyatt enjoyed working together at the Mint Car Wash and bonding over video games.

Wyatt loved all of his family: brothers, sisters, aunts, uncles, and cousins.

Wyatt was predeceased by his Grandparents Merlin and Alma Falk and Jean-Paul and Liz Bernard.

Wyatt is sadly missed by many, but will remain in our hearts forever.

A formal service was held outdoors at The Stoney Creek Centre in Camrose across from the ski hill at 1:00 p.m. on Saturday, October 23, 2021.

Donations can be made to Jumpstart which is an organization that provides all kids with the opportunity to play sports.

Share Your Memory of
Wyatt
Upload Your Memory View All Memories
Be the first to upload a memory!
Share A Memory
Plant a Tree