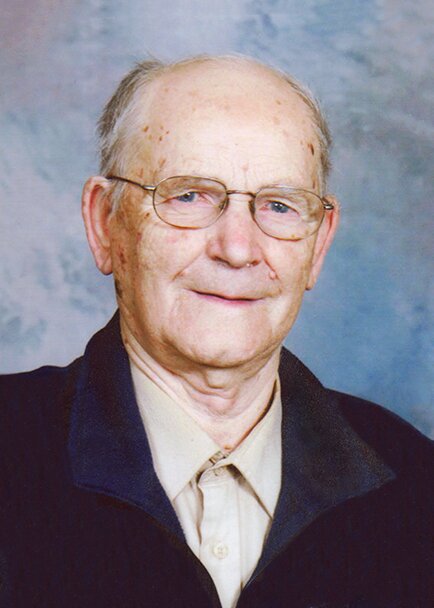 Sandy was born in New Norway in a two story log house on the farm of his parents Martin and Marie Johnson on December 10, 1923. He grew up working on the farm and lived there until he joined the Royal Canadian Air Force in 1943 as an air engine mechanic. While stationed in Bournemouth, England he met Lillian Pettis and 66 days later he took her as his wife in a marriage that was happy and blessed for the next 62 years!

After the war Sandy returned with Lil to farm in New Norway for the next eight years where their sons Daniel and Wayne were born. In 1953 they left farming and Sandy began his full time ministry career of pastoring in Sylvan Lake, and it was there that Lyle was born into the family. Over the next 30 years Sandy served as pastor with the Pentecostal Assemblies of Canada in Settler, Wainwright, Oliver B.C., Vanderhoof B.C, and then once again in Sylvan Lake, where they retired in 1982. Sandy and Lil chose to live out their retirement years in Camrose, never fully retiring as they served six other congregations over the next few years as interim pastors. Sandy was well known for his gift of teaching, sense of humour, home-spun poetry, encouragement and good nature. In his later years in Camrose he became well known for his daily walks with his walker, chatting with and encouraging people along the way.

Sandy is survived by his sons Daniel (Mary), Wayne (Karen), Lyle (Addi); eight grandchildren: Derek (Jodie), Tricia, Vonda (Greg), Dennis (Angie), Benjamin (Sandy), Andrew (Kristin), Mark (Madiha), Joshua (Kristen), as well as 23 great-grandchildren and 7 great-great-grandchildren. He was pre-deceased by his wife Lillian in 2007. He will always be remembered gratefully by his family for his faith, prayers and example of the Lord’s loving kindness and faithfulness!

A Celebration of Life was held at 1:00 p.m., Thursday, August 26, 2021, from the Kingman Baptist Church, with Rev. Lyle Johnson officiating.

If family and friends so desire, memorial contributions in Sandy's memory may be made to the HOPE Mission Edmonton.

Share Your Memory of
Sandy
Upload Your Memory View All Memories
Be the first to upload a memory!
Share A Memory