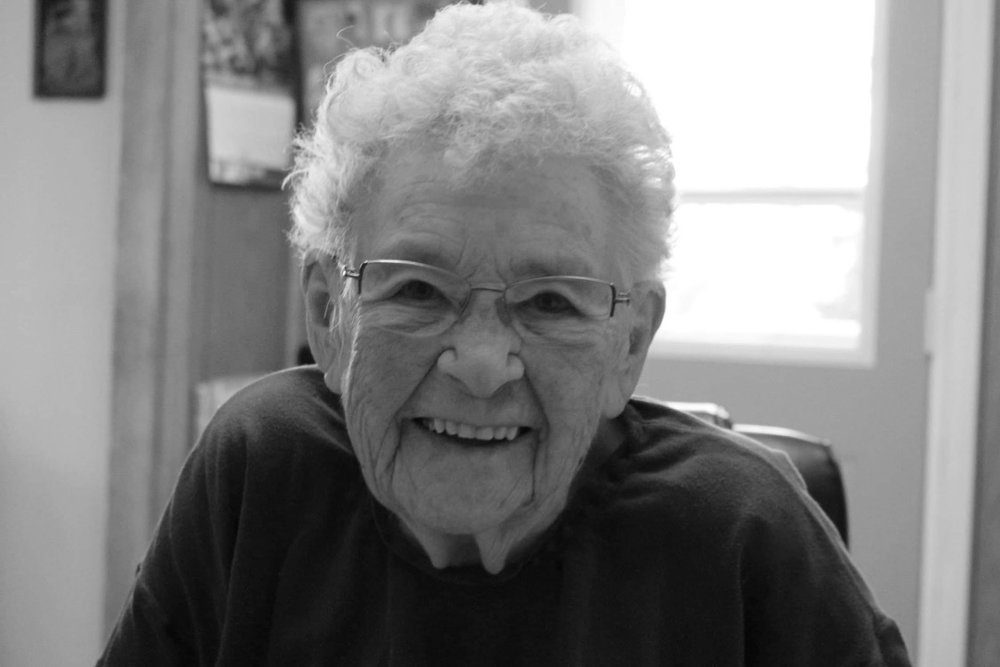 Thelma Doreen Flemming was born at home on March 9, 1927 to Walter and Dagny Heiland.  She was the oldest of six children and the only sister to five brothers.  She was raised on her family’s farm in the Round Hill area eventually attending Normal School and becoming a teacher.  It was during her teaching time in Kingman that she met Elwood Flemming.  They were married at Trondhjem Lutheran Church on July 7, 1949.

Thelma and Elwood built their own home on their farm near Kingman and were blessed with six children: Linda, Larry, Maureen, Nola, Val, and Calvin.  Thelma remained on the farm until the age of 91 when she moved to Camrose.  Thelma was the ultimate farm wife.  She did everything from cooking, to chores, to making her children clothing to knitting while she was waiting for the next load of grain in the truck.  Whatever needed to be done, Thelma stepped in to do it for her family.

Thelma was also very involved in many facets of her community. Many would know her from the Lutefisk supper in Kingman which she headed for many years. Her generosity extended beyond Kingman with her making hundreds of quilts over the years to donate to people in need.  Thelma had 15 grandchildren and 14 and 2/3 (one on the way) great-grandchildren.  She formed a special bond with each of them and they all have their own special memories of moments with her. She made a quilt for every child that entered the family and took special requests for colors and patterns when anyone asked. They all loved grandmas craft box, full of a random assortment of materials from which she could help you make anything or practice sewing. Thelma always had time for a good game of scrabble.  Her scrabble talents were undeniable with her still beating most everyone at 94 and we all know that there was no word that was off-limits.  She was playful and young at heart with a mischievous grin and infectious easy laugh.

Thelma’s life was well-lived and loved.  In the words of her great-grandson:

She will be greatly missed by all who knew her.

If family and friends so desire, memorial contributions in Thelma's memory may be made to the Parkinson’s Society or to the charity of one's choice.

Share Your Memory of
Thelma
Upload Your Memory View All Memories
Be the first to upload a memory!