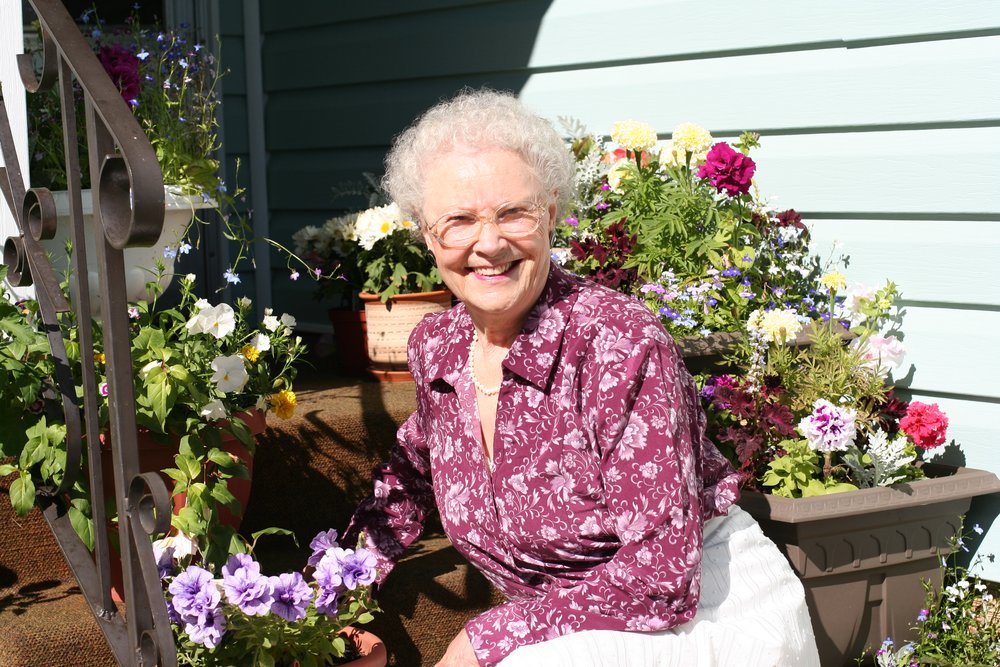 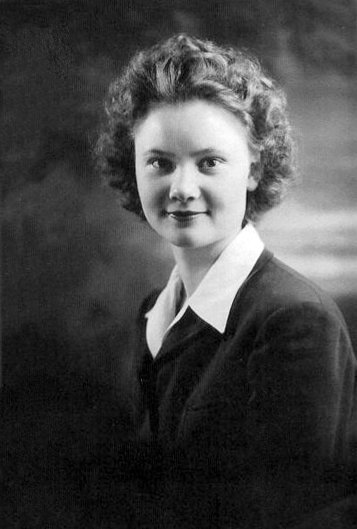 Klara was born on July 16th, 1926 to Mathilda Buss and Gottlieb Molzan.  She grew up on a farm near Rolly View, Alberta.  Her siblings included, Lydia, Leo, Emma, Ruth, Ella, and Martin.
Klara recalled happy memories of her childhood.   Though the family was not wealthy there was always good food, farm eggs, milk, cream, meat, berries and vegetables fresh from the garden.   Their mother was a good baker, there was always fresh bread, cinnamon rolls, and flapjacks.  There were chores, but always time to play.  Klara recalled playing in the hop house (a gazebo) with her sister Ella.  The sisters played ‘house’ and would make mud pies with dirt, real eggs, and decorate their creations with chamomile flowers.  Emma hosted Klara’s first birthday party when Klara was 12, she looked back on the occasion with fondness decades later.
Klara’s sister Ella noted that Klara was quite different as a child compared to the woman she grew to be.  Klara hunted gophers and moles, and played pranks on Ella - some of which weren’t very pleasant.  Once, Klara played a trick on Ella that resulted in Ella’s nose being cut up by the metal screen door of their house.  “Klara could run like a deer, she was fast, but I had more stamina”, Ella said.  “I ran her down and pounded her.  Then we were even.”
Ella however wished to add that by the time Klara was 15 and Ella 12, they had become close and remained best friends all their lives.
Klara had excellent penmanship and was a good letter-writer.  She became pen pals with a girl named Melvis from Adelaide, Australia, when she was 13.  Klara and Melvis remained friends for the rest of their lives.
Klara’s life was saved twice as a child.  On a hot July day, when she was only one, her mother had put her down for a nap and was about to head out to work in the potato patch.  Klara woke up when her sisters had a ‘disagreement’ so her mother brought Klara out to the field with her.  Later that afternoon Klara’s brother Leo noticed smoke coming from the house.  The house burned down completely.
Klara was also seriously ill with pneumonia as a young child.  Having lost her eldest child Lydia as an infant, Klara’s mother looked out at the cemetery and feared she would have another child there soon.  Klara was taken to Edmonton to see a Doctor there.  He noted that Klara’s condition was grave indeed, but directed the family to a nurse who was known for her work saving people from pneumonia.  There was a caveat however, the nurse was (in Ella’s words) “a kleptomaniac” and the family was advised to check the nurse’s bags before she left their house!  The nurse came to stay and did indeed nurse little Klara back to health.
When it was time for the nurse to leave, the family discreetly checked the nurse’s luggage.  An old oiled table cloth was discovered in the nurse’s bag.  The family decided to let her keep it.
In her late teens, Klara went to work at Wensel’s General Store in New Sarepta.  It was an exciting and busy time in Klara’s life as the store served a large area and brought people from miles away.

Klara, no doubt, left a wake of broken hearts when she met a tall handsome man named Alvin Moll.   There are differing stories of how they met, the full story is a mystery perhaps known only to Klara and Alvin themselves.   Klara’s sister Ella noted that Klara and Alvin met through her, and her boyfriend, Fred.  Another story goes that they were “set up” by Alvin’s good friend Harold Grigat.  Klara herself described that she met Alvin in a restaurant in Leduc while dining with someone else, and sometime later Alvin came by the house to ask her out.  What is known, is that Alvin was her “one and only” and shortly after they got together Klara knew that Alvin was the one for her.  They were married on October 13th, 1948.   The wedding party included bridesmaids, Helen Riehl, Klara’s sister Emma Wegner, and Alvin’s niece Winnie.  The groomsman included Harold Grigat and Alvin Riehl.    Alvin and Klara had a memorable honeymoon.  They traveled to Banff, Summerland, Vancouver, Victoria, Washington, Idaho and Montana.  They visited and stayed with two of Alvin’s sisters during the trip.
As newlyweds, Alvin and Klara moved to a little farm house on Mickey McHugh’s farm just south of the Moll family farmhouse.  The young couple worked hard on the farm.   The couple won an award for their cream from the Leduc Creamery who used it to make prize winning butter.  Looking back years later, Klara said, “We always enjoyed living on the farm.  It was a joy to see the crops growing and the harvesting was always so exciting.”
Alvin and Klara raised two sons, Dale and Trevor.  Dale was born in the summer of 1953.  A highlight of those early years with Dale came when he was two, and the family took a trip to the west coast.  They purchased a little redwood toy truck for Dale; which he kept for many years.
In 1965 Klara, Alvin and Dale welcomed Trevor to the family.  Klara recalled as a child, Trevor had a huge appetite and a hardy laugh.  He was also known for some clever and rather hilarious turns of phrase.  One such example:  If Klara made something for dinner that Trevor didn’t like, he’d say, “It’s so good.  I can hardly eat it”.
After back injuries curtailed Alvin’s farming career, Klara and Alvin retired to Camrose where they developed a wide circle of friends.  They maintained close relationships with family.
Klara was a dedicated member and volunteer at the Lutheran church and a volunteer with the Bethany Auxiliary for over 40 years.  Klara’s faith was always very important to her and brought her through the most difficult times in her life, the loss of her husband and her son.
Klara was an avid gardener; her flowers especially were a source of joy and pride.   She enjoyed photography and often told her subjects to “Act Natural”,  in front of the camera.  A visit with Klara wasn’t complete without a meal, a photo, or signing her guest book.  Klara enjoyed watching hockey and figure skating, or “finger painting” as her grandson Tyler called it when he was little.
She possessed a sharp wit, a keen sense of humor and a sparkle in her eye when she laughed.  Klara loved chocolate and said it was “her only sin”.
Klara would tell you that being a grandmother was one of her greatest joys.As grandchildren we recall many times spent on the farm, in the shack, and at the house in Camrose.  We recalled mornings starting with Sunny Boy cereal and orange slices, listening to grandpa reading the daily devotion.  If it was Sunday, we either went to church, or listened to the Sunday service on the TV or radio.  We all hoped for potato patties and hamburgers for lunch, she often made our favourites.  There were also many evenings where grandma and grandpa would bring out the slide projector and we would bundle under blankets in the cool basement and watch slides from their trips.
Over the years, the family spent many occasions together.  We had many laughs, but were all kept in line with grandma’s excellent memory, keen hearing, quick wit and sharp pinch.
We all, including grandma, would have a good laugh when in calling out one of the men, grandma would run down the list of her relations, until she settled on the right one, “Alvin, Ruben, George, Dale, Trevor, Jonathan!
Klara was well travelled, she visited at least 20 countries, mostly with her sisters.  In 1973 she visited several countries in Europe with Ella and Emma, including England, Scotland, France, Germany, Lichtenstein, Belgium, Switzerland, Austria and Italy. In 1993 she journeyed to Australia, New Zealand and Hawaii with Ruth, where Klara met with her life-long pen pal Mavis Keller.  In 2000 Klara and Ella visited Russia, Belarus, Germany, Finland, Sweden, Denmark and Holland.  Years later, Klara said that the highlight of all her travels was when she visited a palace in St. Petersburg and watched a performance of Swan Lake.
Left to cherish her memory are her siblings Ella Sommers and Martin Molzan (Marilyn); her son Dale and his wife Koreen; former daughter-in-law Pearl; grandchildren Jonathan, Rachel, Tamara, Ruben, Kara, and Tyler; great-grandchildren Helayna, Silas and Rowan; as well as many good friends, including Karen Hansen, Wilf and Daphne Breitkreitz, long-time neighbours and her church community.
Klara was predeceased by her husband Alvin, son Trevor, brother Leo, sisters Lydia, Ruth, and Emma.
The family would like to offer their thanks to Bethany Meadows, Bashaw Meadows, Camrose and Bashaw Home Care, as well as friends and family who supported Klara in her later years.
Klara would wish you all safe travels as you leave today, and as her mother before her used to say, “Get lucky home”.
And to you, Klara, we say, “Get lucky home”.

Due to Alberta Health Regulations, a private service will be held. Interment will take place in the Camrose Cemetery. To view a slideshow, please visit:

If family and friends so desire, memorial contributions in Klara's memory may be made to Canadian Lutheran World Relief and Habitat for Humanity - Camrose.