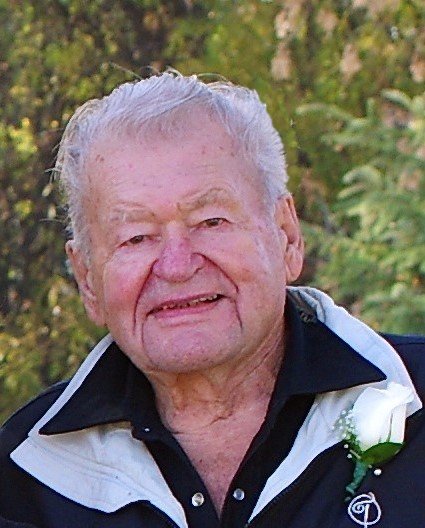 Joseph Francis Voytechek of Camrose, Alberta, passed away on Sunday, January 12, 2020 at the age of 96 years.

Dad was born in Mountain Park on October 5, 1923.  It was here where he developed his passion for hunting, fishing, baseball, hockey and track and field. Dad made Camrose his home for over 70 years where he and Mom built a successful Plumbing and Heating business.  Dad was passionate about the City of Camrose and spent several years serving on the City Council.  He believed in the importance of giving back to the community and volunteered his time with swimming, Knights of Columbus, coaching various sports teams which included baseball, hockey and the gun club.   Many of these teams and individuals received significant honors.  Dad never sought recognition and was often quite humbled when he was acknowledged for his many contributions.   He simply stated “I wanted to help the youth”.
Dad treasured the many letters and visits of the young men and woman who would often remember him throughout the years, if you were to ask him that meant more to him than any medal or trophy.  His leadership, mentoring, values, beliefs and faith came naturally to his character. To many, he was ‘Coach’, ‘Joe’ or ‘Mr. V’, to us we were fortunate to call him ‘Dad’ ‘Gramps’ ‘Great Gramps’.  There will be no more “One more time” however there is eternity with his ‘Bride’.

If family and friends so desire, memorial contributions in Joseph's memory may be made to the Battle River Community Foundation, or to the Mazankowski Alberta Heart Institute.

Share Your Memory of
Joseph
Upload Your Memory View All Memories
Be the first to upload a memory!
Share A Memory
Send Flowers