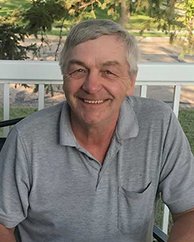 Dennis Brian Foss was born in Camrose, Alberta on August 3, 1954 and passed away in his hometown of Killam, Alberta on Sunday, January 12, 2020.

Dennis married the love of his life Cindy Wagner in Round Hill, Alberta on July 27, 1974, where they settled and began raising three children, Christopher, Cameron and Candiss. In 1987 the family moved to Killam and then onto Edson in 2004. During Cindy’s 15-year battle with cancer Dennis fought by her side, until the spring of 2009, when she lost her very courageous battle.
Dennis’s drive to better himself and provide for his family pushed him to progress through the oil and gas industry from his early days as a welder in Fort McMurray to owning his own consulting business.  Recently Dennis was extremely proud and excited to be working with his brother Harvey and nephews Darrin Staal and Trevor Sutherland.
Dennis combined his two biggest passions, being a grandfather and an avid fisherman, by often taking Caleb and Harlan to the Forestburg damn and making the trip to BC to join Carter and Liam on the water.  He also fought a never ending addiction to renovating houses.  Every year Dennis looked forward to the Huntington’s Golf Tournament where he was able to spend time with all of the family and took great pleasure in the bidding wars during the auction.

Dennis will be remembered as a fierce friend, devoted husband, loving father, grandfather, great-grandfather, uncle and brother.  He was an extremely generous and selfless man.

A Funeral Service was held at 11:00 a.m., Tuesday, January 21, 2020 from the Messiah Lutheran Church, 4810 - 50th Street Camrose. Interment has taken place in the Bosman's Memorial Garden, Round Hill, Alberta.

If family and friends so desire, memorial contributions in Dennis's memory may be made to the Huntington's Society of Canada or to the Cross Cancer Institute or to the Multiple Sclerosis Society.

Share Your Memory of
Dennis
Upload Your Memory View All Memories
Be the first to upload a memory!
Share A Memory
Send Flowers