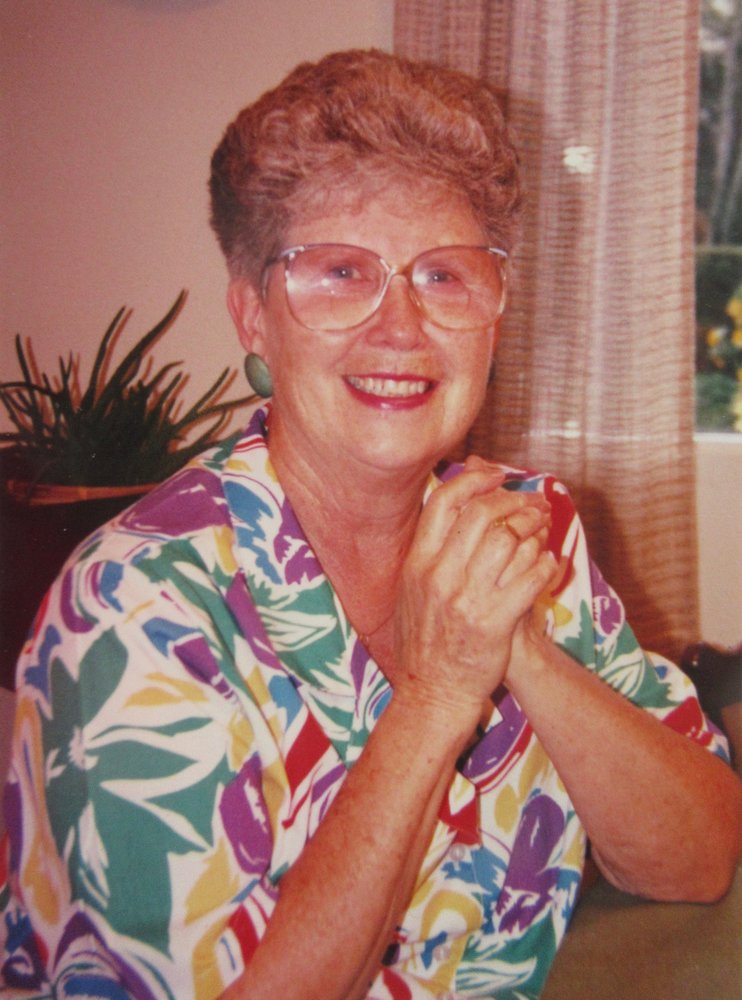 Joyce Isabel Gowers was born on August 29, 1919 to Constance and Watson in Ystrad Mynache, Glamorganshire, Wales. In 1924 she emigrated with her parents to Canada, arrived first in New Norway, and in 1926 moved to their family farm at Wetaskiwin, where her younger siblings, Chuck and Barb, were born.

She attended John Knox Country School and Wetaskiwin High School, where she played on a women’s baseball team, an interest which led to her 62 year marriage to Oscar. Joyce took nurses training in Red Deer but left to marry Oscar on June 18, 1941. During WW2 they lived on Vancouver Island at the Coal Harbour Air Force Base. Their first baby girl died at birth in 1944, Cheryl was born in 1945 and Bill in 1948. Following Oscar’s employment opportunities, they eventually settled in New Norway in 1948, moved to Daysland in 1963 and Camrose in 1971.

Joyce’s family benefitted immensely from her nursing and home-making skills. Outside the home, Joyce worked at different clerking and bookkeeping jobs, and as a telephone operator. After Oscar retired they spent eleven happy winters in Arizona; when he died in 2003, Joyce remained in Camrose until moving to Lamont in 2010 when she required extended care. Joyce loved African violets. But mostly she loved her family: was a devoted wife and mother; cared for and was always interested in her grandchildren, David, Ryan, Will and Renee; and was forever curious about the blossoming of her great-grandchildren, Oskar, Madeline, Little Will and Peter. Left to cherish her memory are her daughter Cheryl Malmo (Denise Brown) of Gibsons, BC; son William (Angie Aranton) of Stratford, Ontario; her four grandchildren and four great-grandchildren; and sister Barbara Martin. Joyce was predeceased by her husband Oscar; parents Watson and Constance; and brother Charles.

If family and friends so desire, memorial contributions are gratefully accepted to CNIB, or to the Alberta Breast Cancer Foundation.

Share Your Memory of
Joyce
Upload Your Memory View All Memories
Be the first to upload a memory!
Share A Memory
Send Flowers