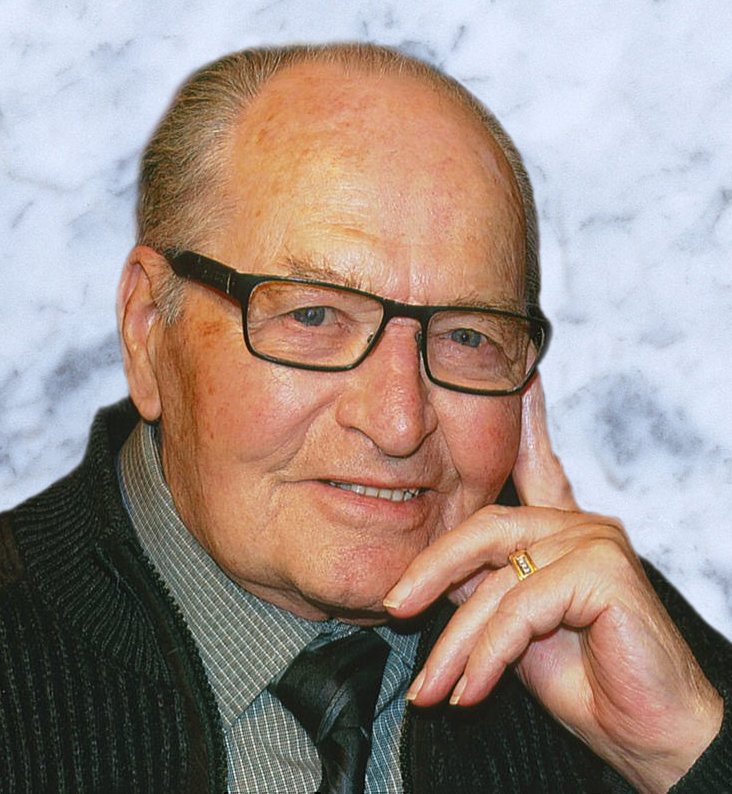 Hans Espe was born on August 7, 1932 in Fort St. John, B.C.  He grew up on a farm in the Montney valley just north of town. At the age of 14, he left home to attend the Camrose Lutheran College in Camrose, Alberta. After graduation he returned to Fort St. John and took a job at the Co-op store. While working there he met and fell in love with a pretty bookkeeper from south of the Peace River. He and Kay Doonan were married in 1953. In 1956 they purchased the Montney General Store which they operated until they sold and moved to Camrose in 1979.
While in Montney, they raised two children; Larry was born in 1958 and Carol in 1963. Their son, Lorne Olaf was Fort St. John’s 1960 New Year’s baby but passed away a short four months later. Hans was a storekeeper who truly put his customers first. He offered credit and charged no interest. He drove customers home if they needed a ride and he opened after hours if someone asked. Hans was also a school bus driver and coached hockey and baseball. He was a director at the Credit Union and president of the Sons of Norway. He was also president of the local junior hockey team for a time.

Hans was an unselfish husband, father and grandfather. He cherished time spent with family, especially his grandchildren: Cylas, Brittany, Kayla, Janelle and Makari. Hans lost his wife Kay to cancer in 2005. Hans remained active with the Sons of Norway, and he volunteered at Habitat for Humanity’s Restore. He continued to be active with Augustana University’s Alumni Association and he delivered Meals on Wheels up until a short time ago. He enjoyed singing with the Messiah Church Choir and the comradery of the Wednesday Work Group.

Hans met the lovely Sylvia Engen at the Messiah Lutheran Church. They were married in 2008 and enjoyed eleven years of love and companionship. Hans formed close bonds with Sylvia’s family.

A funeral service was held at 1:00 p.m., Saturday, April 13, 2019 from the Messiah Lutheran Church, 4810 - 50th Street Camrose with Rev. Calvin Skriver officiating. A Peace Country Celebration of Life will take place at a later date and will coincide with the inurnment at the Montney cemetery.

In lieu of flowers, If family and friends so desire, memorial contributions in Hans's memory may be made to the Parkinson Association of Alberta as well as a charity of one's choice.

Share Your Memory of
Hans
Upload Your Memory View All Memories
Be the first to upload a memory!
Share A Memory
Send Flowers