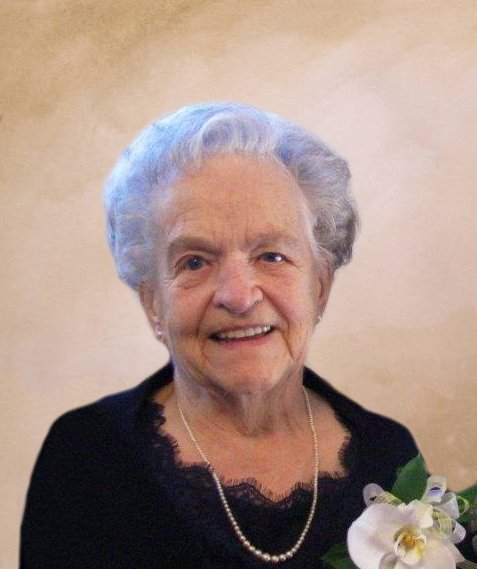 Phyllis Mary Voytechek of Camrose, Alberta, formerly of Saskatoon, Saskatchewan and Mountain Park, Alberta, passed away on Sunday, January 20, 2019 at the age of 96 years.

Phyllis was born, raised and educated in Saskatoon.  She obtained her R.N. from Winnipeg General Hospital and practiced nursing in Saskatoon, Davidson and Camrose. It was while she was nursing in Camrose that she caught the eye of a local hockey star who unabashedly professed his marital intentions from his hospital bed.  They started their married life of over 70 years in the coal mining town of Mountain Park, returning to Camrose a few years later to raise their family.
Phyllis was always committed to her family, her faith, and her community.  She was the backbone of all our endeavors, our biggest fan, our strongest motivation. She served on endless committees in executive roles for the organizations we were part of. Mom walked to every sporting event and activity, often retracing her steps several times in one day. Phyllis was instrumental in bringing Girl Guides to Camrose.  For over 50 years she served the organization in numerous roles and was awarded an Honorary life membership. She loved all sports, was proficient in many and enjoyed daily power walks well into her final years.  Her beautiful gardens and flower beds brought her joy as did her time spent with the Sweet Adeline’s. After a 30 year hiatus, Phyllis returned to nursing and finished off her career at the age of 67 employed by the Smith Clinic. She treasured her family, her children, their spouses, her grands and great-grands.  She was ‘Mom and ‘Nana’ to many. She was the love of Dad’s life, always his “Bride”.

Left to cherish her memory are her husband Joseph; children Charlotte (Al) Dewar of Courtney, BC, Marlaine (Roy) Hagel of Thunder Bay, Ontario, Mike (Dana) of Okotoks, Weston (Eleanor) of Camrose, Jim (Mary) of Sherwood Park, and Pat (Tom) Polmear of Calgary; numerous grandchildren, great-grandchildren, and nieces and nephews.
Phyllis was predeceased by her parents Charles and Edith Weston, and brother Roger Weston.

A Funeral Mass was held at 1:00 p.m., Saturday, January 26, 2019 from the St. Francis Xavier Roman Catholic Church with Rev. Joseph Jacobson as celebrant.

If family and friends so desire, memorial contributions in Phyllis's memory may be made to Mazankowski Alberta Heart Institute, or to the Battle River Community Foundation.