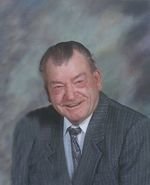 Mr. Ronald James Lamont of Bawlf, formerly of Surrey, B.C., passed away on Sunday, February 3, 2008, at the age of 79 years. He is survived by his wife Julia, four daughters and four sons. He was predeceased by his son Dale, grandson Derek, great grandson Adam, and son-in-law Richard Chenier. Prayer services were held Thursday, February 7, 2008 at 7:00 P.M. from the Burgar Memorial Chapel. Mass of Christian Burial was celebrated on Friday, February 8, 2008 at 11:00 A.M. from St. Francis Xavier Roman Catholic Church in Camrose with Reverend Eduardo Escober as celebrant. Interment followed at the St. Stanislaus Cemetery in Roundhill, AB. If friends so desire, memorial donations are gratefully accepted to the charity of one's choice.

Share Your Memory of
Ronald
Upload Your Memory View All Memories
Be the first to upload a memory!
Share A Memory
Plant a Tree