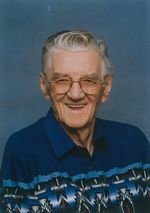 ANDRE , IVAN EDWARD Mr. Ivan Andre of Forestburg, Alberta passed away on Friday February 1, 2008 at the age of 82 years. Ivan is survived by his five daughters and three sons, eighteen grandchildren and eleven great grandchildren and a special companion Genna Broder. Ivan was predeceased by his wife Doreen and infant daughter Joyce, four brothers and three sisters. Funeral services were held on Wednesday February 6, 2008 at 2:00pm from the Forestburg Community Hall ,Forestburg, Alberta. Interment followed in the Forestburg Cemetery. In lieu of flowers memorial contributions may be made to The Forestburg Cemetery Fund.

Share Your Memory of
Ivan
Upload Your Memory View All Memories
Be the first to upload a memory!
Share A Memory
Plant a Tree