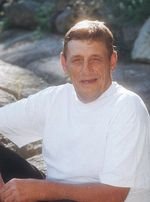 Russell Bridger of Camrose, passed away on Tuesday, January 29, 2008 at the age of 65. Russell will be lovingly remembered by his wife of 22 years, Anna, his daughter Anna (Dave Schulte) of Bittern Lake, and his son Russell (Tracey) Bridger of Calgary. Russ is also survived by his mother Violet Johnston; one brother Richard (Linda) Bridger of Red Deer; three sisters: Lucille (Doyle) Klaassen of Abottsford, B.C., Louise (Norm) Kihn of Garden Bay, B.C., and Lorraine (Mike) Berteig of Swift Current, Sask; and his four grandchildren Kanin, Karyssa, Karsyn, and Kody. Russell was predeceased by his father Kenneth Bridger. A Funeral service was held on Friday, February 1, 2008 at 1:00 p.m., from the Burgar Memorial Chapel, with Rev. Doyle Klaassen officiating. Inurnment will take place at a later date. Donations in memory of Russell may be made to the charity of your choice.

Share Your Memory of
Russell
Upload Your Memory View All Memories
Be the first to upload a memory!
Share A Memory
Plant a Tree