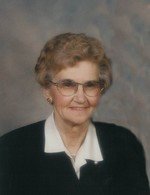 Mrs. Theresa Campbell of Daysland, AB was born on September 12, 1929 in Altario, AB one of fourteen children of George Pauline Schmidt. Theresa passed away peacefully on Monday, November 16, 2009 in the Daysland Hospital after a brief illness at the age of 80 years. She leaves to mourn her son, Donald (Val) Throndson of Edmonton, her daughter Wendy (Eric) Miller of Edmonton and her daughter Joan (Al) Holmberg of Sherwood Park; grandchildren David Throndson, Michael Throndson, Kari (Jeff) Jones all of Edmonton, Brett Holmberg of Bloomington, Illinois, Greg Holmberg and Mitch Holmberg both of Sherwood Park, Chad Miller of Daysland, Cody Miller, Brandon Miller and Justin Miller of Strome. Theresa is also survived by her sister Anne Mandseth of Camrose and her brother Willy Schmidt of Grimshaw. Theresa was predeceased by her second husband Bruce Campbell and first husband Clarence Throndson, her daughter Jacqueline Throndson, two brothers and nine sisters. Funeral Services were held on Thursday, November 19, 2009 at 2:00pm., from Our Lady of the Prairies Roman Catholic Church in Daysland with Rev. Kathleen Taylor officiating. Interment followed in the Daysland Cemetery. If friends so desire memorial contributions are gratefully accepted to the Daysland Health Centre Foundation, the Knox United Church, or to the charity of your choice.

Share Your Memory of
Theresa
Upload Your Memory View All Memories
Be the first to upload a memory!
Share A Memory
Plant a Tree