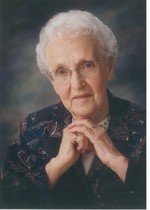 Mrs. Edith Blades of Camrose passed away on Thursday, November 5, 2009 at the age of 97 years of age. Left to cherish her memory is her children: Nolan (Carol) Blades of Calgary, Marion (Ted) Tucker of Sorrento, B.C, and Winifred Blades of Edmonton; 5 grandchildren Ryan Blades(Dawn) of Burlington, Ont., Meghan Blades (Andrew) Juskitis of Thousand Oaks, California, Chritopher Tucker of Vancouver, Sarah Tucker (Trevor Phillips) of Calgary and Laurie (Lee) Paul of Calgary. She is also survived by one brother Gerald (Miriam) Hutchinson of Edmonton. She was predeceased by her husband Lawrence "Laurie", brothers Alexander "Sandy", Charles, Ian, and Kenneth; sisters Barbara, Doris, Helen, and Janet. Funeral services were held on Tuesday, November 10, 2009 at 2:30 p.m. from the Camrose United Church (4829 50 Street) with Mary Ann Pastuck officiating. Memorial donations are gratefully accepted to St. Mary's Hospital.

Share Your Memory of
Edith
Upload Your Memory View All Memories
Be the first to upload a memory!
Share A Memory
Plant a Tree