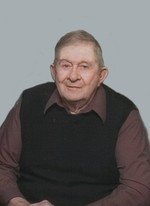 Merril was born on August 5, 1933 at his home in Rosalind. He passed away at St. Mary's Hospital surrounded by his family on February 8, 2009. Merril was united in marriage to Ida Norman of Falun on November 14, 1956. To this union one son, who died in infancy, and six daughters were born: Laureen (Ross) Herder, Cathy (Jim) Urkow, Wendy (Tim) Buckle, Shelly (Roger) Urkow, Leanne, and Linda (Kevin) Burkard. Merril cherished and loved to tease each of his grandchildren: Jennifer (Clint) Armstrong, Lee (Alison) Herder, Karmen (David) Bowal, Angela Urkow (Austin Farrell), Colette Urkow (Wes Zeniuk), Michelle (Ryan) Degenstein, Tammy Buckle (Ryan Armstrong), Brandon (Kristen) Urkow, Renee (Brett) McCarroll, Jordan and Tyler Burkard. Great-grandchildren: Kendra Armstrong, Austin and Megan Herder, Marissa, Devin, and Karis Degenstein, and Keegan Armstrong. He is also survived by sisters: Dolly McCrea, Marion Hoflin, Sylvia (Harold) Turner, Bonnie (Ron) Kercher, and Marlene (Tim) Shopland. His brother Tom (Sharon) Orr, sister-in-law Merna Orr and brother-in-law Keith Schweer. Merril grew up with the love of his family, farming, milking cows, and raising pigs. He also had a passion for gardening and you would often find him in his strawberry patch. He farmed up until 1995 when ill health forced him to retire. In March 2007, Merril and Ida moved to Camrose. Merril was predeceased by his infant son Kenneth, parents George and May (Queenie), sister Elsie Schweer, infant sister Leona, and brother Gordon. He was also predeceased by five half sisters and one half brother. Funeral services were held on Saturday, February 14, 2009 at 1:00 p.m. from the Camrose Church of God with Rev. Brian Hunter officiating. Interment took place in the Camrose Cemetery. Memorial contributions are gratefully accepted in memory of Merril to the Arthritis Society, St. Mary's Hospital Palliative Care Unit or a charity of your choice.

Share Your Memory of
Merril
Upload Your Memory View All Memories
Be the first to upload a memory!
Share A Memory
Plant a Tree