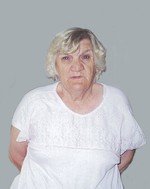 Mrs. Inga Roode of Camrose passed away on Friday, February 6, 2009 at the age of 71 years. Inga was born in Holbein, Saskatchewan on January 2nd, 1938 to Jack and Gladys Hendrickson. She grew up on the farm and attended school with her sister Eileen. Inga met her husband Hubert in Holbein through working for him. From there they fell in love, and were married. Inga and Hubert moved to High Prairie, Alberta and started their family. Inga was a homemaker and a mother to eight children: five daughters: Martha, Marlene, Darlene, Peggy and Mary, and three sons: Ralph, Lester and Robert. They raised all their children in High Prairie. Inga enjoyed planting a garden every year at Grandma Lizzie's farm. She also enjoyed walking on the trails, reading, and spending time with her grandchildren. She loved anything that the grandchildren were involved in. She enjoyed special occasions, spent at school concerts or birthday parties. Inga lost her husband in 1990, and ten years later she decided to move to Camrose and make it her home. She was diagnosed with cancer in 2006 and fought a brave battle. Left to cherish her memory are her eight children: Martha McDermott of High Prairie, Ralph (Wendi) Abt of Surrey B.C., Marlene (Gordon) Chapman of Edmonton, Darlene (Tony) Roode of High Prairie, Lester Roode of Prince Albert, Peggy (Jon Martin) Roode of Edmonton, Robert Roode of Camrose, and Mary (Glen Gronberg) Roode of Hay Lakes. Inga is also survived by her numerous grandchildren, great grandchildren, and her sister Eileen (Con) Hebert of Saskatoon. Inga was predeceased by her husband Hubert. Funeral Services were held on Wednesday February 11, 2009 at 1:00pm., from The Burgar Memorial Chapel with Rev. Brian Hunter (St. Mary's Hospital Pastoral Care) officiating. Interment followed in the Camrose Cemetery. Memorial contributions are gratefully accepted to the Alberta Cancer Foundation.

Share Your Memory of
Inga
Upload Your Memory View All Memories
Be the first to upload a memory!
Share A Memory
Plant a Tree