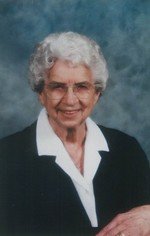 Please share a memory of Anne to include in a keepsake book for family and friends.
View Tribute Book
Mrs. Anne Galenza of Camrose, passed away on Thursday, December 4, 2008 at the age of 94 years. Anne is survived by her children: Doreen (Ken) Wancho of Ohaton, Carolyne (John) Williams of Red Deer, Betty Galenza of Camrose, Genevieve (Bob) Wesley of Viking, Eleanor (Wayne) Martin of Red Deer, Bob (Julie) Galenza of Tofield, and Dan Galenza of Red Deer; 18 grandchildren; 34 great-grandchildren; and one great-grandchild. Anne is also survived by her sister Helen Kostuk of Edmonton. Anne was predeceased by husband Frank in 1981; two infant sons, Leonard and Ronald; three brothers: Mike, John, and Joe; and one sister, Mary. Prayer services were held on Monday, December 8, 2008 at 7:00 p.m., from the Burgar Memorial Chapel. Mass of Christian Burial was held on Tuesday, December 9, 2008 at 10:30 a.m., from St. Francis Xavier Roman Catholic Church with Rev. Eduardo Escober as celebrant. Interment followed in the Camrose Cemetery. Memorial contributions are gratefully accepted to the charity of your choice.

A Memorial Tree was planted for Anne
We are deeply sorry for your loss ~ the staff at Burgar Funeral Home Camrose Ltd.
Join in honoring their life - plant a memorial tree
Online Memory & Photo Sharing Event
Online Event
About this Event

Share Your Memory of
Anne
Upload Your Memory View All Memories
Be the first to upload a memory!
Share A Memory
Plant a Tree