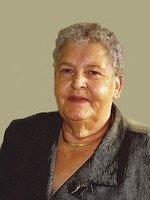 Please share a memory of Ruth to include in a keepsake book for family and friends.
View Tribute Book
Ruth Anneliese Scharmann Ruth Schanz was born on March 28, 1930 in Neu Morschen, Germany. She passed away on July 25, 2008 in St. Mary's Hospital in Camrose, at the age of 78 years. Ruth worked as a kindergarden helper until the age of 14 years. She was confimed in the Lutheran Church and took care of two elderly women until she met Willi after the war in 1947. They were married in 1951. To this union, three children were born: Rudy, Fred, and Maryann. Ruth and Willi immigrated to Canada in July of 1952, where they worked on the Snider farm, then made a move to the Johnson farm in 1954, where they remained for many years. In 1972, Ruth worked at Bethany Home as a cook until 1987 when she retired due to health reasons. Ruth loved to cook, bake, knit, and crochet in her spare time. Granny blankets are her family's favorites, among the memory of the Black Forest Cake! Left to cherish her memory are her children: Rudy (Monika) of Prince George, B.C. and their children, Douglas, Nicole, Travis, and Tanya; Fred (Sheila) of Mornville and their children, Adam (Adrianna), Eric, and Craig; and Maryann (Norman) Wetsch of Armena, and their children, Marsha (Jason), Jason (Nicole), Michael, and David; as well as eight great-grandchildren: Heather, Bryanna, Alexander, Zachary, Scarlett, Liam, Zach, and Tyler. Ruth was predeceased by her husband Willi in 2000, her parents, and numerous brothers and sisters. Funeral Services were held on Friday, August 2, 2008 at 2:00pm., from Scandia Lutheran Church in Armena. Inurnment took place in the Camrose Cemetery If friends so desire memorial contributions are gratefully accepted to the charity of your choice.

A Memorial Tree was planted for Ruth
We are deeply sorry for your loss ~ the staff at Burgar Funeral Home Camrose Ltd.
Join in honoring their life - plant a memorial tree
Online Memory & Photo Sharing Event
Online Event
About this Event

Share Your Memory of
Ruth
Upload Your Memory View All Memories
Be the first to upload a memory!
Share A Memory
Plant a Tree