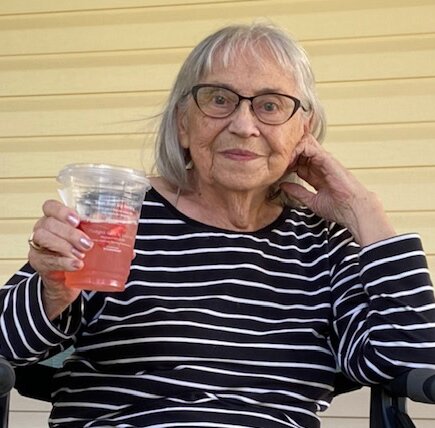 It is with great sadness we announce that Martha Louise Meyer passed away on Thursday, November 10th, 2022 at the age of 83.

Martha will be lovingly remembered by her daughter Valerie; daughter-in-law Janelle; grandson Luka; sister Iris (Len); brothers Louis, Dennis (Linda), and Bruce (Dan); and numerous nieces, nephews, and friends.  She was predeceased by her husband George in 2020 and missed him dearly.

Martha was born in Fort Vermilion, Alberta and was the first child of Fred and Kathleen Batt. She grew up in the small farming community of Rocky Lane, on her parent’s farm. She attended school at the one-room school house across the road, Batt School. When Martha completed grade eight, she left home so she could continue on in school as Batt School only went up to grade eight. She moved to Sexsmith, Alberta and completed grades 9, 10, and 11.  Her next move was to Peace River where she attended grade twelve. Once she completed school, she moved to Edmonton where she enrolled at McTavish Business College and then went on to work at an insurance office in Edmonton.  During a trip home for Christmas, Martha was introduced to George Meyer (the new teacher at Batt School). They began visiting and writing, and soon George presented her with a ring. They married in July of 1962, in Rocky Lane. A year later, their daughter Valerie was born. Martha worked as a school secretary at Rocky Lane School until 1979 when the Meyer family moved to Bawlf. Two years later, Martha and George built their dream home in Camrose but continued commuting to Bawlf for work. Eventually, Martha became the school secretary at Bawlf and continued working there until she retired.

Martha had so many talents and was always busy doing something.  She spent many hours sewing clothing, doll clothes, aprons, and quilts. She also made Petit Point jewelry and completed numerous pictures in Petit Point.  She made beautiful knitted afghans, scarfs, and wool jackets, and she seemed to know how to fix just about anything. Martha was an incredible baker and always had a neat way of making anything she made just a little more special. Martha made the best shortbread cookies and the best Christmas pudding…and that was just the tip of the iceberg. All of her cakes, pies, cookies, or desserts had a little decoration or special design cut into the crust. That was Martha’s way. If Martha and George weren’t busy enough with work and antique shows, they also started selling baking at the Camrose Farmer’s Market. Martha loved music, especially country music. She loved attending BVJ with George every year until they could no longer.  With her love of music also came her love of ballroom dancing and square dancing...and she had a great dance partner.

Martha was all about family and loved spending time with loved ones over a nice supper, card game, or a cup of coffee. Many phone calls started with, “I was just thinking”, and by the time the conversation was over, she had a plan and it would definitely happen. Martha had very special relationships with her sister, Iris, sister-in-law, Shirley, and friend, Myrt Hooper. Whether it involved crafting, shopping, or card games with the husbands, Martha spoke fondly of the times she spent with them. She loved the phone calls she received from Louis and Dennis on Sunday morning, was always so excited when Bruce and Dan came for a visit, and cherished the time she spent with Iris, having coffee, talking, and working on a puzzle.

Martha’s pride and joy was her grandson, Luka, or “grandma’s boy” as he was often called.  Whether they were playing Yahtzee, painting fingernails, creating a hairstyle, or just watching TV together, they had a connection like no other. Her phone calls will forever be missed.

In addition to everything else, Martha was an amazing mom who put family at the top of the list. She was always just a phone call or a short drive away and could pretty much answer or solve anything. She made occasions like Christmas and birthdays extra special by cooking a favourite meal or with unique and thoughtful gifts.  She will be dearly missed by her daughter Val. They spent many evenings talking, putting puzzles together, having tea, or going for drives. Janelle, Val, and Luka will always remember what they call “Martha-isms” or funny things Martha would say, but strangely made sense.

Martha’s family would like to thank the staff at Bethany Meadows for everything they did and do on a daily basis.

Martha loved flowers, but in lieu of flowers, she would want you to buy a puzzle or game and spend time with your family. Or she’d want you to go out for a really nice supper together (probably Chinese food) because Martha was all about family and traditions.

What we have once enjoyed deeply, we can never lose.
All that we love deeply becomes a part of us.
Helen Keller

Share Your Memory of
Martha
Upload Your Memory View All Memories
Be the first to upload a memory!
Share A Memory
Plant a Tree