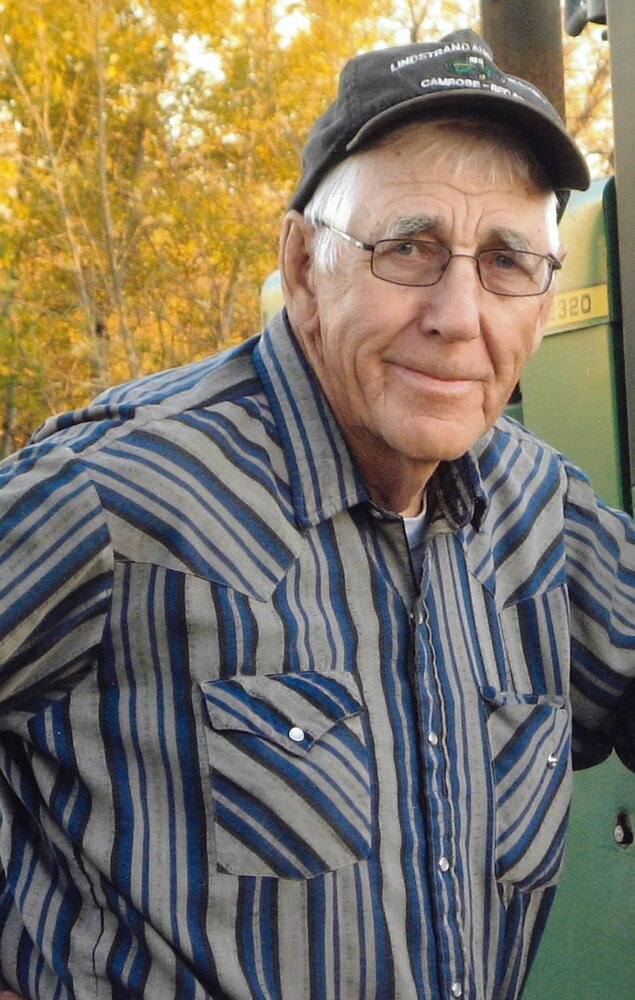 Kore Bohmer was born in Faberg, Norway on January 19, 1923. Along with his family, he emigrated from Norway in 1929, arriving by ship at Pier 21 in Halifax and then continuing by train to Bawlf.
Through the depression in the 1930’s, the Bohmers moved and rented three different farms until they were able to purchase the farm in 1945. Kore attended school at Allied, Acme and Hartland Schools. He began helping his dad work the fields with horse-drawn equipment at nine years of age.

Kore met Lil while visiting the Loken farm which was a  ½ mile away. They were married on July 31, 1949 and were blessed with two children: Calvin in 1952 and Brenda in 1957.
Kore was an avid outdoorsman, fisherman and hunter. He was involved in various organizations including the Bawlf 4-H Club, Bawlf Boy Scouts, Camrose Rifle & Revolver Club, Rose City Amateur Radio Club (VE6 KOR), Bawlf Curling Club and the Bawlf Lutheran Church.

Motorbiking became a passion for Kore in the 1980’s. For several years, Kore and Lil often jumped on the Harley and headed down the road for an ice cream! Kore rode until the age of 86.
Kore and Lil retired from farming and moved to Bawlf in 1991. They joined the Bawlf Seniors’ Club where Kore played snooker regularly. In 2012, they moved to Providence Place in Daysland. Lil passed away in 2013 and Kore continued to live in Daysland. He passed away peacefully, with Brenda by his side, on November 12, 2022 at the age of 99 years.
Left to cherish his memory are his daughter Brenda; sister-in-law Ella Thompson; numerous nieces, nephews, and extended family in Norway; special friends Madeline Blumhagen, Jan Proctor, and Lynn Horbasenko; and special great-great-nephew, Kore Smith (a.k.a. Little Kore). Kore was predeceased by his wife Lil; his son Calvin; his sister Ragnhild Olsen; and his parents Herman & Margit Bohmer.

A Funeral Service was held at 11:00 a.m., Friday, November 18, 2022 from the Bawlf Lutheran Church, officiated by the Rev. Garth Wehrfritz-Hanson. The inurnment has taken place in the Village of Bawlf Cemetery immediately following the service.

If family and friends so desire, memorial contributions in Kore's memory may be made to the Bawlf Lutheran Church, the Daysland Hospital Foundation, or to the charity of one's choice.

The family wishes to extend their heartfelt gratitude to the staff of Providence Place and the Daysland Hospital for the care they provided Kore.

Share Your Memory of
Kore
Upload Your Memory View All Memories
Be the first to upload a memory!
Share A Memory
Plant a Tree