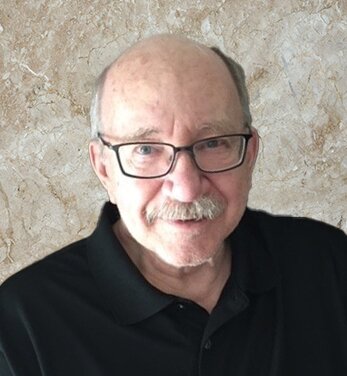 Russell Peter Hoffman of Camrose, Alberta, passed away on Saturday, September 10, 2022 at the age of 77 years.

Russell Hoffman was welcomed into the world as the first of six children to John and Alice Hoffman in Humboldt, SK on January 2, 1945.

When Russell was ten, John & Alice moved to Birtle, MB with Russell and his sisters Ivy and Enid. It was here where three more siblings, Karen, Greg and Murray, completed the family.

Upon completion of Grade 12, Russell hitchhiked to Alberta where he secured a position as a farmhand at the farm of Ben and Shirley Erickson. He became friends with the neighbourhood kids, particularly Harvey Norman. Through Harvey, he met his first wife, and Harvey’s sister, Linda.  Together they welcomed two children, Nicole and Bradley.

In 1983, Russell joined a dating service through which he met Hildy and her daughter Alex. Six months later, on July 16, they were married.

Russell worked for Aamco Transmissions in Edmonton for many years, and in 1993 the family moved to Vancouver Island where Russell opened his own transmission shop. He ran the shop for 10 years until his retirement.

In 2000, Brad married his childhood sweetheart Angie, and blessed Russell with three grandchildren, Ethan, Emma and Gracyn. Wanting to be closer to the kids and grandkids, Russell and Hildy moved to Camrose, AB.

During his retirement, Russell enjoyed such hobbies as listening to classic rock, tinkering with cars, and doing renovations around the house. His most treasured times included relaxing with his favourite cat Willie and a nice cold beer.

For the last five years, Russell was in care at Bethany & Rosehaven due to his Parkinson’s.

Russell was proud of many things in his life, but the special ones were his wife and family, and his success with his business.

Russell was predeceased by his parents John and Alice Hoffman.

If family and friends so desire, memorial contributions in Russell's memory may be made to the Camrose & Area Animal Shelter Society.

Share Your Memory of
Russell
Upload Your Memory View All Memories
Be the first to upload a memory!
Share A Memory
Plant a Tree