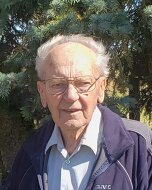 Please share a memory of William to include in a keepsake book for family and friends.
View Tribute Book

Bill was born in Dubno, Poland on January 18, 1926.  The Adam family immigrated to Canada in December of 1927, first to Compeer, and in September of 1937, the family moved to Sherwood Park.

In 1941, Gustav Adam purchased a farm to raise his large family and Bill helped his dad on the farm until 1947. He later found work in Edmonton where he met the love of his life, Enid.  Bill and Enid married on June 23, 1951 at St. John’s Lutheran Church in Ardrossan where the Adam family worshiped.

Bill and Enid lived in Edmonton when their first son Darcy was born. While living in Sherwood Park, Daryl was born. In 1956, Bill took a job in Drayton Valley and Dwight and Darren were born. In 1964, Bill was transferred to Whitecourt with Mobile Oil where he went into business with his brother and bought Whitecourt Tire and Battery.  A few years later they built ABEE motors. In 1986, Bill and Enid moved to Delburne and bought an acreage for a simpler life where he could tinker around with his tools and his “toys.”  Bill worked for a few more years and then retired; this was his forever home with his wife Enid.

Bill was a man who loved to spend time with his family and friends. He enjoyed building go-carts with the kids, fixing up old vehicles, going out to the lake camping, worshiping at his church, and attending all the events that the church had to offer. One of his biggest passions was fixing up old tractors and then hauling them to the nearest tractor pull and showing off his hard work!

Bill was loved by all and will be deeply missed.

If family and friends so desire, memorial contributions in Bill's memory may be made to the Heart and Stroke Foundation or the Bethany Lutheran Church in Donalda.