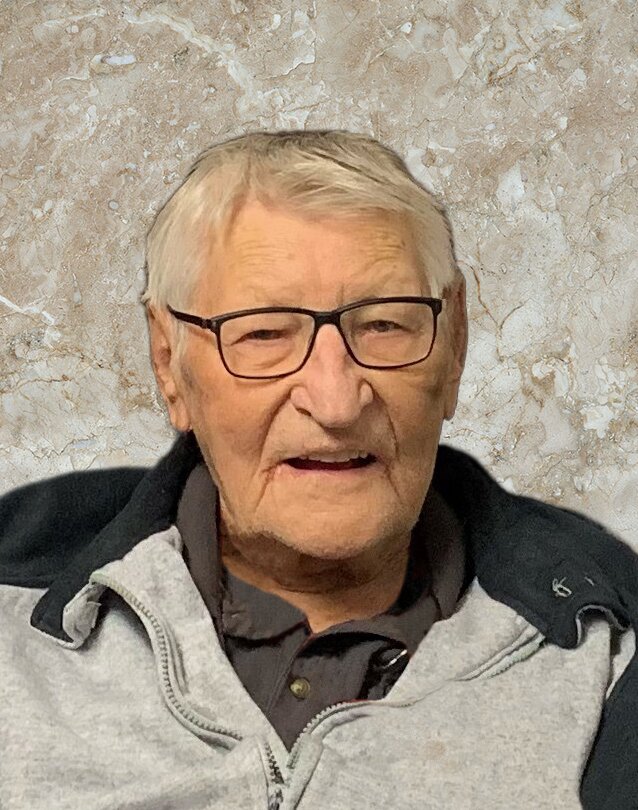 Martin Michael Pasychnyk of Camrose, AB, formerly of Round Hill, passed away on Sunday, January 9, 2022 at the age of 92 years.

Martin Michael Pasychnyk was born on July 24, 1929 on a farm near Buchanan, Saskatchewan to Josef and Anna, joining siblings Jane and Frank. Rose completed their family seven years later. Dad grew up on the farm and worked hard alongside his father and brother, but the farm life was not for him. He had great ambitions and set off to Moose Jaw Normal School after grade 12. Dad taught in Saskatchewan for a few years then ventured to Alberta, which eventually led him to Rosedale where he was the vice-principal at East Coulee School. His next teaching assignment was at Delia School where he was the vice-principal as well as Physical Education teacher. While there his love of coaching and officiating many sports began.

It was in Delia where he met the love of his life for 61.5 years, Doris Morrison of the Hand Hills, who was also teaching there. They were married on July 9, 1960. They had the most beautiful love story. Dad considered himself the luckiest man in the world to have Mom as his wife, and mentioned that almost daily. His devotion to her was like no other. The last 3 years have been difficult for him without Mom by his side, but he would walk or take a cab to go and visit her as often as he could. He touched the hearts of the staff at Bethany Meadows with his commitment and devotion to her. She always came first in his mind.

Dad's teaching and administration career also took him to Smokey Lake, Strome, Veteran and Round Hill, where he retired as principal in 1986, after being instrumental in reinstating a High School at Round Hill. He impacted so many lives as a teacher, coach and administrator.

Dad could never sit still which led him to work briefly at Canadian Tire in Camrose. He enjoyed this as he got to visit with and help so many people. He kept himself busy umping ball games, gardening, running to town for Mom any chance he got, riding his bike, mowing the cemeteries at Round Hill and travelling to all of his grandchildren's various activities.

Dad adored each of his grandchildren and boasted about them and their achievements to anyone who would listen. If you were Dido's grandchild, you were the BEST at whatever you did. He put on miles attending ball games, hockey games, dance recitals, Christmas concerts, figure skating carnivals and even attended a lot of their practices.

Dad loved sports of any kind and could be found either behind home plate umping into his eighties, in the stand cheering on his kids and grandchildren, or watching whatever sport he could find on TV. In his early years, Dad also played many sports, but his passion was baseball- he even pitched a no hitter at Drumheller the first time Mom came to watch him play. Many people have fond memories of Dad umping all over Alberta. A great achievement that brought him much pride was winning the Alberta Softball Umpire of the Year in 1989 and a merit award from Softball Alberta in 2006.

Dad had a great love for animals especially dogs, cats, birds and skunks. He would faithfully feed the birds and enjoyed recording on his calendar which birds he saw each day. He even belonged to a bird club which included John, Joe and Baba. Dad loved walking his dogs with his big stick in hand to ward off any dogs that may try to get near his dog!

Dad was an avid gardener, even helping Jamie garden this past summer. Nothing bothered him more than those pesky weeds. He was proud of his yard and his garden and he was pleased to shared his bounty with friends, neighbours and family, as well as CLBI for many years. Berry and apple picking also brought him much joy, and Mom much work.

Dad read whatever he could get his hands on, especially books about animals and sports. You could always find a Sudoku or a crossword puzzle book, as well as some scratch tickets on the table by his chair.

Dad enjoyed camping and fishing and most summers a trip with Mom's extended family took us to Cold Lake. We also camped into BC and all over Alberta, usually following Dad's umpiring circuit.

Dad made friends wherever he went and if you were his friend, you were a great friend for life. His laughter, smile and jokes will be missed by so many.

Dad was a man of very strong faith. He was often asked to read at Trondhjem Lutheran Church, which he and Mom faithfully attended, and he was honoured to do so. The angels were expecting him and now he is with them in God's arms.

We can imagine him now: standing in front of a class, saying "Show your work!", calling balls and strikes behind home plate, wearing his shorts and working in his garden, watching game shows, especially The Price is Right (but NOT the one with Drew Carry) and Wheel of Fortune, walking his dogs, hugging his beloved parents and siblings, and snuggling with Robbie in his recliner.

He was predeceased by his parents Josef and Anna; grandson Robbie; sister Jane Tabin; and brothers Frank, William and Michael.

Due to Alberta Health restrictions, a private family service will be held at a later date.

If family and friends so desire, memorial contributions in Martin's memory may be made to Alberta Diabetes Foundation, the Parkinson Association of Alberta, or Stollery Children's Hospital.

Share Your Memory of
Martin
Upload Your Memory View All Memories
Be the first to upload a memory!
Share A Memory
Plant a Tree