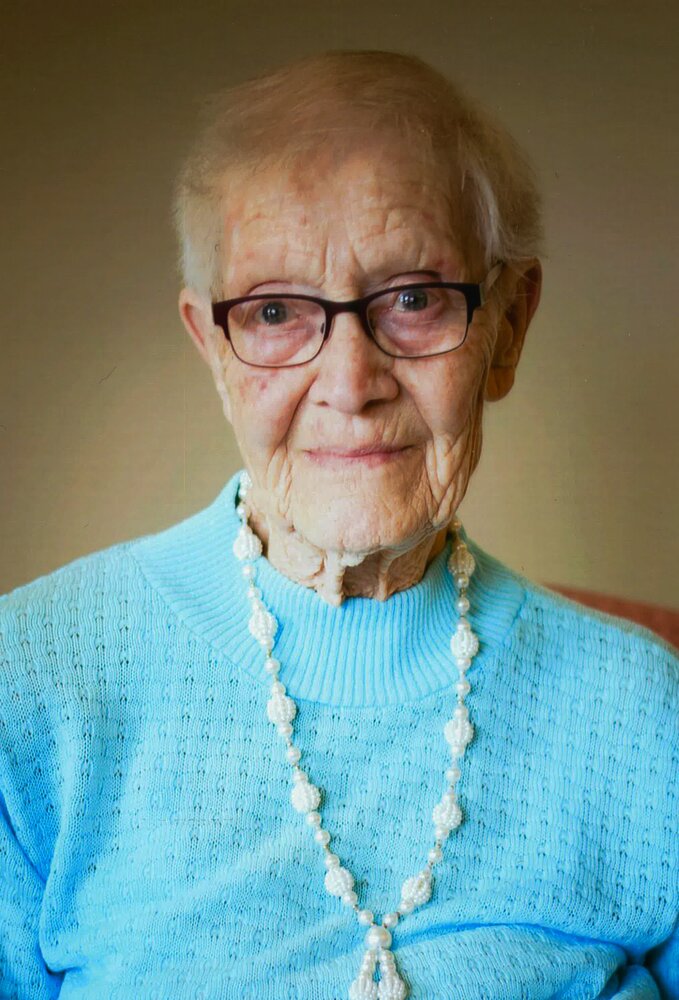 Hilda Kathleen Anderson of Camrose, Alberta, passed away on Monday, November 29, 2021, at the age of 101 years.

Hilda was born June 26, 1920 in the Nursing Home in Camrose, Alberta to Kathleen and Thomas Price. Hilda passed away November 29, 2021 in the St. Mary’s Hospital, Camrose. Hilda resided at the Deer Meadows Residence for 14 years celebrating her 101st birthday in June. A recent fall accelerated a decline in her overall health.

Hilda attended Daresbury rural school southeast of Camrose and one year at Willow Hill School after which she went to work at the farm of Bob and Kate Wilcox and other neighbours. That is where she met her husband Frank Bernhard Anderson.

Hilda married Frank on April 3, 1940 at New Westminster British Columbia. They returned to Alberta in August and in 1941 began farming and continued to farm until 1974 when Frank suffered a stroke. A 100-year farm award was presented to the Anderson family in 2018.

Three things that were important to Hilda were her family, her friends and her faith.

Hilda was active in the Ohaton United Church, was a member of the United Church Women’s group and taught Sunday School. Hilda was also a member of the Daresbury Community Centre. Hilda loved square dancing, music, was an avid reader, and enjoyed playing cards with neighbours. Hilda and Frank and a number of family and neighbours restored the New Salem Skafse Cemetery which had fallen into disrepair and is still an active cemetery today.

“Say not in sorrow that she is no more, but in thankfulness that she has been.”

If family and friends so desire, memorial contributions in Hilda's memory may be made to the New Salem Skafse Cemetery (in care of Diana Foss, 4913 - 56th St. Camrose, AB T4V 2C6).