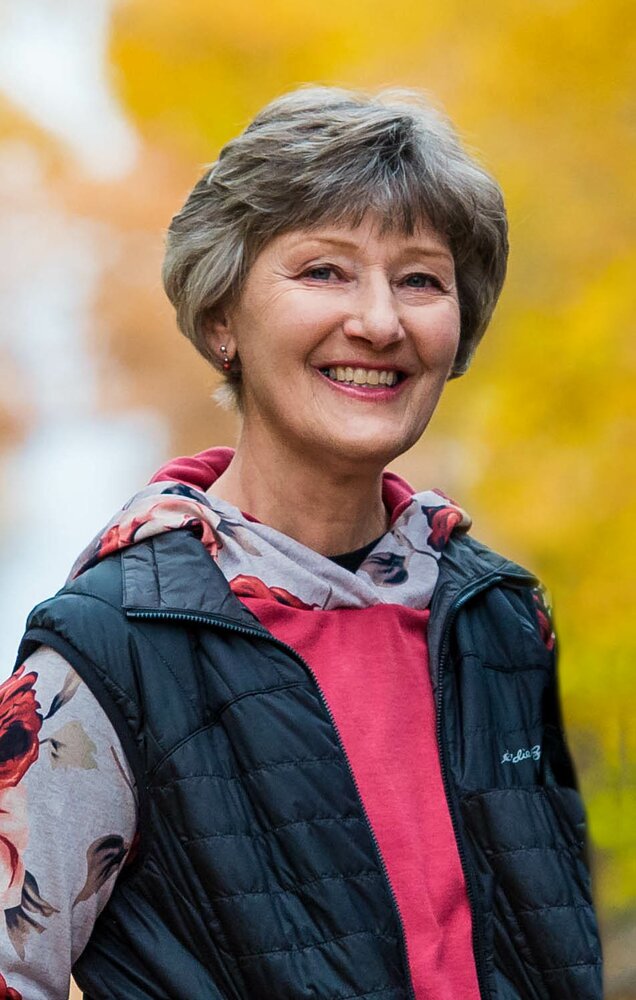 Terry Lynn Playfair, 72, of Donalda, Alberta passed away peacefully on October 21, 2021 in Camrose, Alberta with Gary by her side.

Terry was born in Ponoka to Ben and Edna Schickerowski on July 25th, 1949. She grew up just south of Crestomere on the family farm with her two sisters and brother. She always had a love for sports: school sports; ball games with family during summer tournaments; varsity team at Concordia and the Olds College teams. She attended school at Crestomere until Grade 11  when she then moved to Edmonton and attended Concordia High School in 1966. In 1967, after graduating, she went to Olds College and obtained a diploma in Clothing and Design.

During her last year in high school she was introduced to Gary Playfair at her aunty Betty’s store in Leedale. Despite not appearing interested in him at first, they began dating and were engaged in 1967. She made her wedding dress as a part of her school project in Olds.

Terry married Gary on August 9th, 1968 at the Trinity Lutheran Church in Bismark, Alberta. Their reception was at the school gym in Crestomere followed by a dance at the Leedale Hall. They honeymooned out in the Nordegg area, making their way to Edson where Gary returned to working on the rigs. Over the next decade they moved around between Edson, Aurora, Red Deer, and Benalto. Terry became a mother in 1970 when Shane was born.

In 1981 they moved to Dorenlee, where they started farming again, and the next year they adopted a baby girl - Joni. Together they ran a dairy farm until 1996, beef cattle until 2001, and continued grain farming until 2015, then they retired to Donalda. Gary didn’t retire for long and began grain farming again with Terry by his side.

Throughout Terry’s life she was a farmer, a wife, and a mother, but there was so much more. She became an Ohma to Ashley in 1994, Samantha in 2000, Mark in 2004, Lincon in 2008, and Danica in 2011. She loved her grandchildren dearly and after moving to Donalda, she regularly spent her time with Lincon and Danica at their school events, hockey games, taking them on road trips and having them over after school. She worked as a school bus driver running a route for the Edberg School and as a clerk for the Doug Johnson Auction Service.

Terry loved God her savior and was a beacon of light to anyone who knew her. Beginning when she lived at home, she had a talent for the organ and regularly played it for her church’s worship. She led bible studies where she shared her knowledge of the Bible and helped others transform their lives. She volunteered at Living Springs Bible Camp in the kitchen and church events. She was a servant of the Lord in everything she did, impacting the lives of those around her without her even knowing. She was selfless, loved deeply, and genuinely cared for others.

“Death leaves a heartache no one can heal, love leaves a memory no one can steal.” - Unknown

To the wife, mother, Ohma, sister, friend, and neighbor that you were, we will never forget you. We love you.

A private family service will be held.

The family wishes to extend their gratitude to all the healthcare staff at St. Mary’s Hospital and the Cross Cancer Institute.

If family and friends so desire, memorial contributions in Terry's memory may be made to the Cross Cancer Institute. (11560 University Avenue Edmonton, Alberta T6G 1Z2)

Share Your Memory of
Terry
Upload Your Memory View All Memories
Be the first to upload a memory!
Share A Memory
Plant a Tree