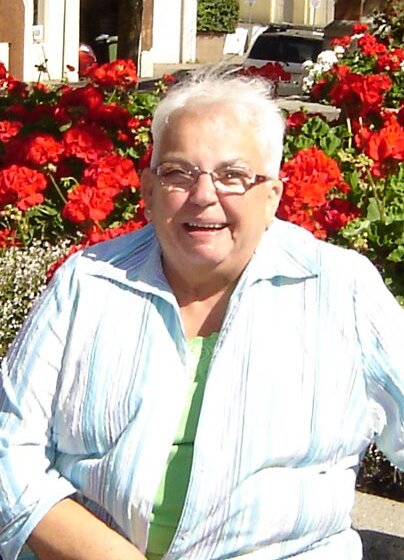 Frances Gail Pfeiffer of Camrose, Alberta, passed away on Sunday, September 26, 2021 at the age of 75 years.

Frances was born in Rocky Mountain House, Alberta.  She was the oldest child of Ken and Herta McCrimmon.  Along with her brothers, Donald and Michael, the family moved to Red Deer where Frances attended school. She then worked as a telephone operator with AGT.

Frances married Richard in 1975, and moved to his family farm in the Gladstone area. They raised three children Dana, Tyler and Karmyn.  Frances enjoyed helping out on the farm and loved her huge garden.  She began working in the kitchen at Augustana University in Camrose.

In 1996 Frances and Richard moved to Camrose. They enjoyed gardening, camping, and traveling to places such as Australia, Germany and Hawaii.  They loved spending time with their twelve grandchildren.  After her retirement Frances continued to enjoy cooking, crafts and games. She loved going for a drive, having coffee with her friends and the occasional trip to the casino.

She was predeceased by her husband Richard, parents Ken and Herta McCrimmon and brother Michael McCrimmon.

The family appreciates and would like to acknowledge your love and support at this time.

If family and friends so desire, memorial contributions in Frances's memory may be made to STARS, the Canadian Diabetes Foundation, or to St. Mary's Hospital Foundation.

Share Your Memory of
Frances
Upload Your Memory View All Memories
Be the first to upload a memory!
Share A Memory
Plant a Tree