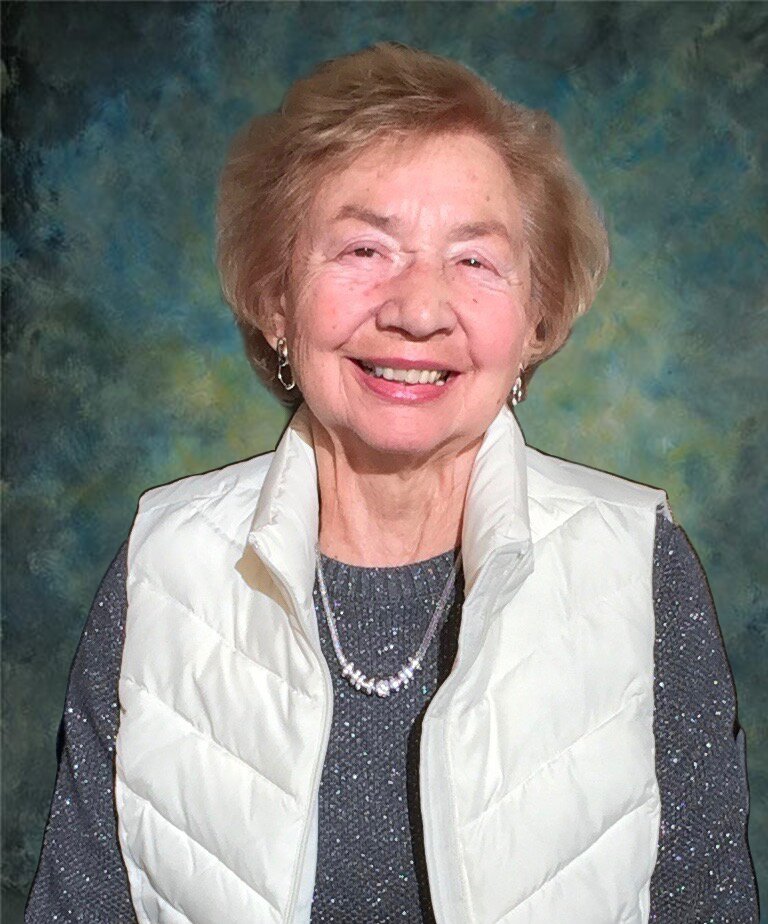 Janet Alfhild Syms of Edmonton, Alberta, formerly of Freemont, California, passed away on Sunday, September 12, 2021 at the age of 91 years. Janet was born to Johan (John) and Hildur Naslund, Swedish immigrants who came to Canada in 1918 from Minnesota, USA. She was born on the family homestead near the hamlet of Hay Lakes, southeast of Edmonton. Janet was the youngest of eight children, five boys and three girls. Janet loved growing up on the farm, and especially loved the horses. As the youngest, she did not have the same responsibilities as her older siblings, and was able to spend much more time outdoors with her father than her two older sisters.

Janet received her early education at the Swanhills School, a one-room school not far from the farm. The children would walk to school in the spring/fall, and ski to school in the winter. While attending Swanhills School, at one point Janet was taught by her older cousin, Mary Grue (nee Lofgren). She received her high school education at Camrose Normal School (now Augustana University) in Camrose, Alberta. After graduation, Janet attended the Royal Alexandra School of Nursing in Edmonton and became a Registered Nurse, graduating in 1953.

Janet nursed in various places, including Edmonton, Grande Prairie and Vancouver, before eventually heading to San Francisco, California in 1958. She was supposed to be accompanied by a nurse colleague, but at the last moment, her friend decided not to head south. Janet went anyway, as they had all the work visas, etc. in place.

Janet had only planned on staying in California for a few months, but alas, this was not to be. She met a young man of Greek heritage named John Syms from Oakland, California and her plans to head back to Canada were put on hold. Janet and John married in 1962, and shortly after moved to Fremont, California where Janet worked at Washington Hospital. Janet’s primary passion in nursing was surgery, and she worked most of her career on the Surgical Unit, nursing pre and post op surgical patients. Janet retired from nursing in 1996.

Janet and John did not have any children, although they had numerous nieces and nephews. They loved spending their free time in the Sierra Nevada Mountains, and especially at the Longbarn, a motel resort in the mountains. In addition, they loved to spend time going for drives in the Bay area and beyond, accompanied by their much-loved dog, Cindy, and a thermos of coffee. John was an avid gun person, and taught Janet how to shoot handguns. Before long Janet had her own gun, and they would both spend time target shooting.

John passed away in 2005, after a long illness. Janet’s nursing background once again came in handy, as Janet nursed John at home, with the help of Hospice nurses. Janet continued to live in the Fremont home she had shared with her husband until 2011. She was often visited by “The Boys” (Tim and John), who became her beloved companions, and later, caregivers, The “Three Amigos” went on numerous road trips to such places as Bodega Bay, Russian River, Sonoma, Yosemite, Monterey and Carmel, Big Sur, and of course, San Francisco. Their biggest trip and adventure was flying back to Canada in 2017 to repatriate Janet to the country of her birth.

Janet was predeceased by her husband John, her parents, and parents-in-law, and six siblings. She leaves to mourn her passing her beloved Boys, nephew Tim Grahn and his life partner, John Chwyl; her sister Sylvia Lechelt; her sister-in-law Hazel Naslund; and numerous nieces and nephews.

If family and friends so desire, memorial contributions in Janet's memory may be made to Wilhelmina Lutheran Church, or to the charity of one's choice.

Share Your Memory of
Janet
Upload Your Memory View All Memories
Be the first to upload a memory!
Share A Memory