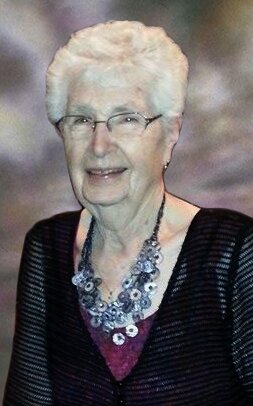 Anne was born January 16, 1930 in Rosalind, and after a short move to Bashaw the family settled on a farm near Tawatinaw, Alberta.  Here Anne met Victor, and the two married in 1949. They taught together in Perryvale, Colinton, Athabasca, Holden and eventually settled in Camrose in 1964. Anne taught English at Camrose Composite High and directed plays in the drama department.

Anne was a tenacious reader and amassed a collection of hundreds of books she readily shared. She said, “Books are meant for reading, not sitting on shelves.”  A competitive bridge player, master gardener, impeccable cook and baker, painter, writer, talented seamstress and terrific athlete, Anne could do it all. Her yard was filled with flowers, her house smelled of baked bread, her sewing room filled with fabric and notions, and always a book or two on the go. Anne was a lifelong learner with an insatiable curiosity. Her coffee table was littered with magazines from Bon Appetit to New York Times Crosswords. Her latest endeavours would surprise us, like our biorhythms charted on the bulletin board or a vat of crab apple liquor fermenting in the laundry room. She played a respectable game of golf, was a tennis fan and enjoyed strawberries with Grand Marnier.
Family was important to Anne.  Whatever the children or grandchildren needed Anne was there, creating costumes, knitting sweaters, attending events, or providing quiet counsel; Anne made herself available.

After retiring Anne focussed on her community.  She volunteered in countless organizations at the local, provincial and national levels. Her razor-sharp attention to detail and her intense intellect made her a natural for executive or Chair positions. She was asked by groups to present on how to run efficient meetings or how to follow the Rules of Order. Her ability to bring order to chaos served well as her family of five children grew to include spouses and grandchildren. Family gatherings included plenty of robust discussion, competitive games (Anne was notorious for not letting her children win!), reminders to behave properly, and words of wisdom, all delivered with laughter, love and hearty helpings of perogies.

We are thankful that Mom is reunited with her beloved parents, husband and sister. Her legacy lives on in her children.  Like her, we promise to be dedicated, open to adventure, respectful and hard-working…and to serve apple pie with cheese at family dinners.

If family and friends so desire, memorial contributions in Anne's memory may be made in lieu of flowers to the St. Francis Xavier Roman Catholic Church, or to the St. Mary's Hospital Auxiliary Fund.