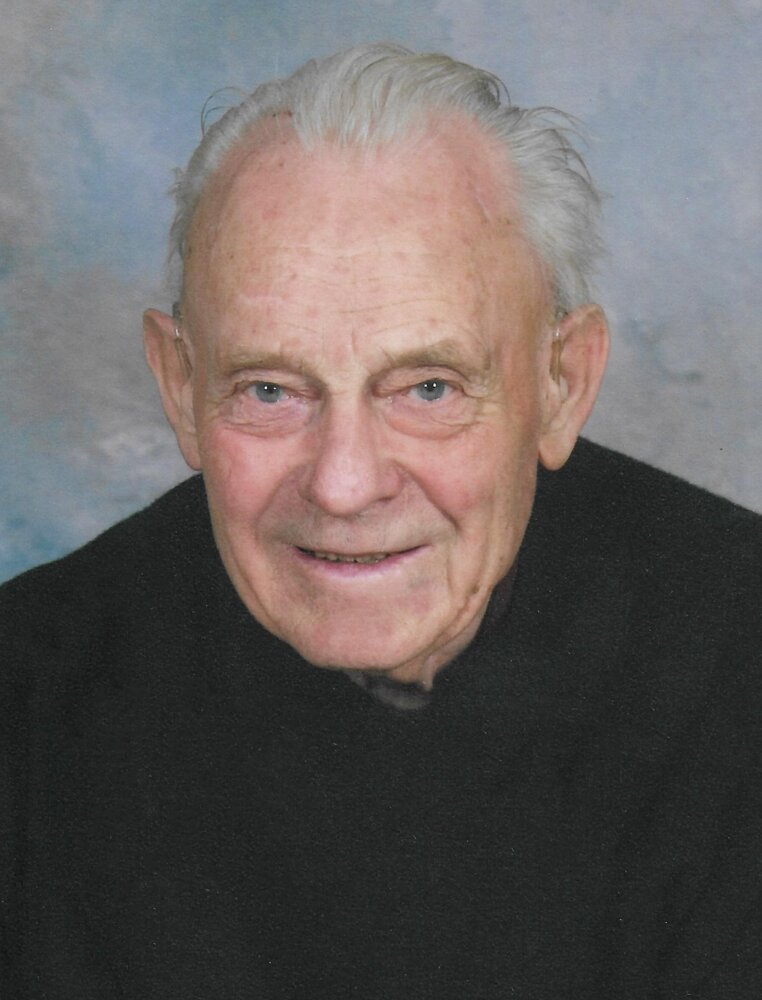 Jens Christian Jensen of Camrose passed away on Sunday, August 22, 2021, four days shy of his 89th birthday. He was predeceased by his first wife of 43 years, Mavis in 1997, and then by Ingrid in 2018, whom he married in 2000; his parents, Semine (Minna) and Christian (Chris) Jensen, and a brother, Andreas. He is lovingly remembered by his four sons: Dan (Helga), Gordon (Brenda), Grant (Kathleen), and Alan; and by grandchildren Aaron, Jason (Dezy), Jonathan (Anna Clara), Graham (Jannaya), Lesley (Tony Diep), Robyn, Eric (Sydney); along with three great-granddaughters: Solveig Lilja, Sylvan, Maren; and four siblings, Anna, Ken, George and Elisabeth; and countless other relatives and friends.

Dad has always been a master storyteller. Some of us recall our small children climbing up onto Grandpa’s lap to hear about his antics growing up on a dairy farm outside Cochrane, Alberta. He also recorded the farm tales on cassettes for the grandchildren living far away. All would listen attentively as he regaled them with tales of how he teased a bull, performed acrobatics on the windmill, built human-bearing kites, and other adventurous stories.

He was always creating stories, even as a blacksmith, a welder, and a machinist. When he built things, he built them extra strong, meant to last … and last … and last. When Mom wanted new kitchen cabinets, he wanted to make them out of steel plates so they would never need replacing. We teased him that there was more metal plate on his property than in the whole Canadian navy. And Dad was also an inventor. This led to the filing of many patents at the pipe mill where he worked and his own personal patent for a hot-water tank shut-off. His inventions came about because of his natural curiosity, always asking himself, “why?” or “what if?” or “suppose …” He loved to read and learn. He also had a great love for the Donalda coulees and often “camped in the hills.”

When his first wife, Mavis, died in 1997, he turned to writing poetry and stories to deal with his grief and with the reality of being on his own. Among other things, he developed a manual on cooking for all hardworking men who had become single, including advice on judging the temperature of a pan: “if you spit on it and the droplet flattened out and sizzled, it was about 200 degrees.”

Dad remarried in 2000, and his new bride Ingrid provided him the companionship and love he needed. But the poems and stories continued, especially when her Alzheimer’s required her move to a care facility. The stories and poems explored his pain, grief, and loneliness, but also his strong trust in God’s grace in the midst of everything. The poems also portray a dedicated father who instilled in his children the importance of helping others and doing the “right thing.” He has shared his time and abilities with the church, the Scouts, the community, Habitat for Humanity, Camrose Men’s Shed, the Camrose and District Museum, and countless other groups and individuals.

Inurnment of ashes has taken place at the Edberg Cemetery.

A special thanks to all the staff at St. Mary’s hospital for their wonderful care and support for dad in his journey. Thanks also to Jim Brager for the artwork, and Harvey and David Vikse, Jeff Fox of Evraz, and Dennis Hale of Pioneer Crane for fabricating the urn.

Donations to commemorate Jens’ life can be made to the Habitat for Humanity, the Canadian Lutheran World Relief, or the Canadian Cancer Society.