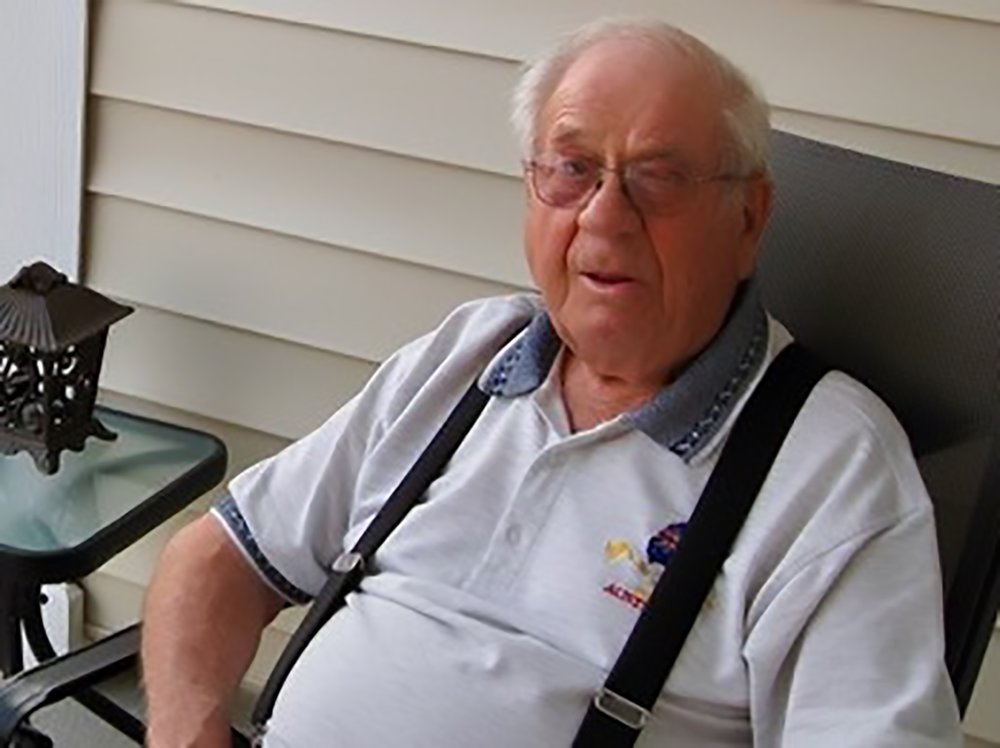 Gordon John MacDonald of Camrose, Alberta, formerly of Rosalind, passed away on Thursday, April 29, 2021, at the age of 92 years.

Gord was born on September 8, 1928, in Camrose, Alberta to Fred and Margaret (Weller) MacDonald.   He lived most of his life in Rosalind, with his later retirement life in Camrose at Deer Meadows then Season’s Retirement Home. He attended school in Rosalind until Grade 11, took Grade 12 in Camrose, and then went to McTavish Business College in Edmonton. He returned to Rosalind in 1947 to work in the family general store and the Rosalind Post Office with his dad, Fred, and brother Stan.   Fred retired from the store in 1970 and Gord and Stan continued to operate the store and the Post Office. Their homemade sausage became a big name in the community.

Gord met Adeline Johnson, the love of his life, in 1944, when she moved to Rosalind.  They were married on June 6, 1951. They were blessed with five children. Gord always supported community activities, including hockey, curling, and baseball. He was an avid sports fan. He enjoyed fishing, bird hunting, camping with family and friends, golfing, going to the horse races, and gardening. He loved his garden and would spend hours planting, weeding, and then harvesting his garden.  Gord was a very generous and kind man who was always ready to help with any community endeavor and continually supported many charitable organizations. He was very proud of Rosalind and a highly respected member of the community. He was a lifetime member of the Rosalind Elks for over 75 years.  He was also a voluntary member of the Rosalind Fire Department in his younger years and a school bus driver. After his dad retired from the school board in 1966, Gord became a member of the Camrose Country School Board and served some time as chairman. He was also on the Merco Wholesale board in Edmonton, the wholesale their store used, and served some time as the board president.

Some of Gord’s most happy moments were time spent with his family. He was immensely proud of his children, grandchildren, and great-grandchildren and enjoyed their visits and his time spent with them.
Gord will be sadly missed by his loving wife of almost 70 years, Adeline; his five children, Tom (Karen) of Edmonton, Ken (Carol) of Calgary, Reg (Frances) of Cochrane, Jane (David) of Ft. Saskatchewan, and Ron (Ronda) of Loveland, Colorado. He will be fondly remembered by his grandchildren, Steven (Karla), Amy (Cory), Adam, Sarah (Mat), Leann (Chris), Jill (Derek), and Scott and his eleven great-grandchildren along with numerous nieces and nephews. He was the last living member of Fred and Margaret’s children and was predeceased by his parents and nine siblings.
Gordon will always be remembered as a great husband, dad, grandpa, great-grandpa, uncle, and friend.

He will be forever remembered for his kindness, generosity, and sense of humour.

The family would like to thank the staff at St. Mary’s Hospital, Deer Meadows, Seasons Retirement home and for all the compassion and care they have given Gord.

A private family service was held. Inurnment has taken place in St. Elizabeth Roman Catholic Cemetery, Rosalind. To view a recording of the service, please click on the following link:

If family and friends so desire, memorial contributions in Gordon's memory may be made to the Heart and Stroke Foundation, St. Mary's Hospital Auxiliary, or to the W.F. MacDonald Family Fund C/O the Battle River Community Foundation.

Share Your Memory of
Gordon
Upload Your Memory View All Memories
Be the first to upload a memory!