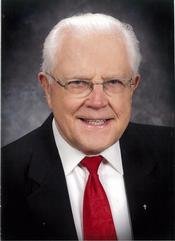 Please share a memory of Rev. to include in a keepsake book for family and friends.
View Tribute Book
Rev. Dr. Arnold Bertram Hagen of Camrose passed away Sunday, January 12, 2014 at the age of 93 years. Arnold Bertram Harold Hagen, the first son of Hans and Alma Hagen, was born on the farm in Hagen, Saskatchewan on March 29th, 1920. His grandmother acted as the midwife for the delivery. He had two older sisters, Irene and Rose (Ken) Arnstead. Completing the family were two younger brothers, Lloyd (Ida) and Clarence (Ruth), as well as sisters Harriet (Orville) Pederson and Helen (Norman) Salte. As a boy, Arnold combined many farm tasks with his love of sports - especially hockey and baseball. He played for the Hagen hockey and baseball teams. As was common in that time, he quit school after grade nine. In 1942, Arnold was drafted into the army. While in the army he contracted pneumonia, followed by pleurisy and emphysema, which almost took his life. Due to the time needed for recovery, he was honourably discharged from the army. He enrolled at SLBI, Outlook, completing his high school and Bible school (1943 - 1946). God's hand was in this as he met his future wife, Ruth Oine McFarlane while in attendance there. They were married on August 21, 1946 at Ratner, Saskatchewan. To this union were added Ruby (Dennis Knudtson), Daniel (Audrey Friggstad), David (Sheri Gueldenhaar), Joy (Orville Evenson), Crystal (Doug MacKay), and Philip (June Olsen). Sensing a call to the gospel ministry, Arnold and Ruth moved to Saskatoon in 1946 where Arnold completed his Bachelor of Arts (University of Saskatchewan) and Bachelor of Divinity (Luther Seminary) in 1950. Their home in Saskatoon was a granary, renovated by Arnold, and moved from a farm. He obtained his Master of Theology (1976) from the seminary in St. Paul, Minnesota and an honorary Doctorate of Divinity (1986) from Luther Seminary, Saskatoon. Their places of ministry over the years were: Prince Albert (1950 - 1952), Vancouver (1952 - 62), Camrose (CLBI president 1962 - 1985), and after retiring, Kingman / Round Hill (1985 -1993). Arnold was active in various positions in the church at large as well as the World Mission Prayer League. In later years, he led Bible studies and Sunday services in Mesa, Arizona. He also led Bible studies at retirement homes in Camrose and provided interm puplit supply throughout central Alberta. Arnold was noted for his great ability to memorize, committing to memory many books of the Bible. He loved to sing and play his violin, as well as engaging in farming with his son David for 30 years. However, his first love was sharing the gospel through teaching and preaching. He was a loving father and husband whose family meant the world to him. During his last years he suffered from cancer with it gradually consuming his body. In looking to the future, he was excited to reach his heavenly home. Quoting from the Apostle Paul, "For to me to live is Christ, and to die is gain." (Philippians 1:21) Also from Psalm 116:15, "Precious in the sight of the Lord is the death of his saints." He leaves behind his wife Ruth, his six children and their spouses, 21 grandchildren, and 30 great-grandchildren with two more expected in March. A time of public visitation was held on Thursday, January 16, 2014 at 7:00- 8:00pm., from the Burgar Memorial Chapel. A Funeral Service was held 2:00 p.m., Friday, January 17, 2014 from Messiah Lutheran Church with Pastors Harold Rust and Rob Lewis officiating. Interment has taken place in the Camrose Cemetery. If family and friends so desire, memorial contributions are gratefully accepted to CLBI, World Mission Prayer League, or to the charity of one's choice.

A Memorial Tree was planted for Rev.
We are deeply sorry for your loss ~ the staff at Burgar Funeral Home Camrose Ltd.
Join in honoring their life - plant a memorial tree
Online Memory & Photo Sharing Event
Online Event
About this Event

Share Your Memory of
Rev.
Upload Your Memory View All Memories
Be the first to upload a memory!
Share A Memory
Plant a Tree