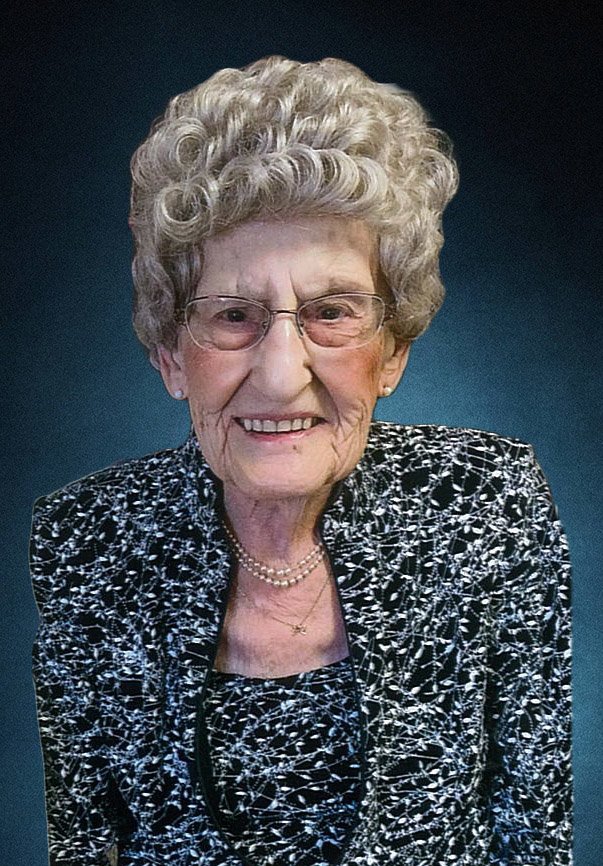 It is with great sadness and broken hearts that we announce the passing of Lily Schultz, due to Covid-19, on Monday November 23, 2020 in Camrose, Alberta at the amazing age of 103 years.

Lily was born October 22, 1917 at New Sarepta, Alberta to Carl C and Helene (Burghardt) Lechelt, the seventh of twelve children.  She was raised on the family farm a few miles south of New Sarepta, Alberta and became a tremendous help with her siblings and chores for her Mother.  She walked four miles to Canard school in harsh winter conditions until age twelve.

Lily and four of her siblings, age seven to sixteen, moved to their Leduc farm to attend Sunnyvale school, a much shorter walk across their field, while her family moved back and forth. Lily and her sister Edith earned $2.50 cleaning the school and bought a pair of second-hand skates to share. She also walked four miles to Leduc High School to complete the last two years.  In 1938 Lily worked at the Hay Lakes Hotel for $8.00 per month then at the New Sarepta Hotel for $12.00 per month.

On November 22, 1939 Lily married Rudolf Schultz.  They began farming with wedding gifts of two cows from each of their parents and a sow from her brother.  They took over the homestead in 1940 and continued looking after Rudolf’s parents on the yard until their deaths.  They both worked very hard on the farm during difficult war years to provide for their family of seven children.  Although life was often harsh they truly enjoyed fun visits with family and friends.  Sunday was a day for church and rest and socializing.  Lily’s faith in God was her strength and comfort all her life.  She was a devoted wife and an amazing mother to her children.

With the installation of electricity in 1952 their daily comforts improved dramatically with lights, appliances, television, and water tank heaters for livestock.  In 1972 Lily and Rudolf sold the farm and after one year in Rolly View and moved to an acreage in the Bailey subdivision, Camrose.  Rudolf and Lily both worked at the Sparling Store for a few years and she also cleaned houses in the area.  Four years later they moved into Camrose where she lived for the next 33 years. She was a dedicated care-giver to Rudolf until his passing in 1996.  At the age of 92 Lily moved to RoseAlta Lodge where she resided until her death.

Lily’s greatest love was family and friends and she treasured every moment with them.  Every new addition to her family was welcomed with unconditional love.  She loved picking wild mushrooms and saskatoons, nurtured her garden and flowers with tender loving care.  Her cooking and baking skills are legendary, providing delicious baked goodies to the entire neighborhood.  She enjoyed trips to BC for fruit, several adventures to USA and Mexico, Whitehorse, and Halifax to visit family.  She always looked picture-perfect with her classic style and regal grace.  Lily was a treasured gift to each and everyone who was privileged to share special moments with her.  She will be greatly missed by all.

Lily was predeceased by her parents, husband Rudolf, and son Milton.

Due to Covid-19 restrictions a private family service was held at Our Saviour Lutheran Cemetery, Hay Lakes, Alberta.

Share Your Memory of
Lily
Upload Your Memory View All Memories
Be the first to upload a memory!