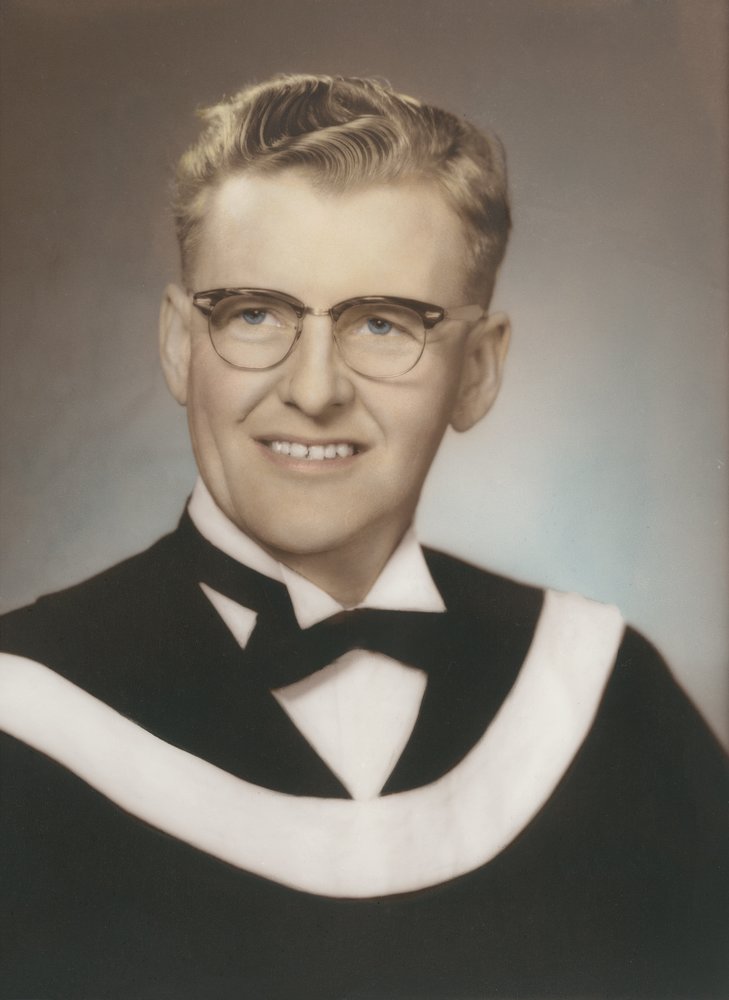 Gordon Arthur Dennis of Camrose, Alberta, passed away on Monday, September 14, 2020 at the age of 97 years. Gordon was born on March 12, 1923 to Arthur and Rilla Dennis in Minburn, Alberta.

Left to cherish his memory are his wife Devina of 71 years, nephew Dennis (Dianne) Larcombe of BC, and many friends. He was predeceased by his parents, brother Melvin, and sisters Eleanor Larcombe and Irene Elton.

He attended school in Minburn and Vegreville high school, and the attended Norman School at the U of A for one year. He then taught at Edson for two years as a war emergency teacher. He moved to Edberg school as vice principal for six years.

He met Devina and they were married July 2, 1949 in Edberg Lutheran Church. They moved to Camrose in1952 to teach at Sifton for six years. He then attended the U of A for one year to earn his Bachelor of Education.

Gordon was a Phys Ed, Math and social studies teacher and was given the chance by the Camrose Veterans to attend three summers at Guelph, Ontario to learn Track and Field. He was also chosen to attend United Nations in Brussels for one week when Chester Ronning was ambassador to Norway in 1975. Then to UNESCO in Paris for one week.

He was very active in the community; he spent 60 years as a Mason, two years as Master, 60 years in the Eastern Star, and was a life member of the Lions Club and was chosen as a Hall of Fame member. Gordon also served on both the Maroon’s and Viking’s hockey boards. In later years he was an avid fan of the Kodiaks and attended all the games.

Gordon retired from teaching in 1982 after 37 years. He taught at Camrose Composite High School when it opened in 1964.

Gordon and Devina travelled to many countries around the world, and they spent 28 winters in St. Petersburg Beach, Florida. They golfed and enjoyed the beach, they also watched 35 spacecraft take off from Cape Canaveral.

He will be sadly missed by all those who knew him.

Left to cherish his memory are his wife Devina of 71 years, nephew Dennis (Dianne) Larcombe of BC, and many friends. He was predeceased by his parents, brother Melvin, and sisters Eleanor Larcombe and Irene Elton.

A private service has been held.

If family and friends so desire, memorial contributions are gratefully accepted to the charity of one's choice.