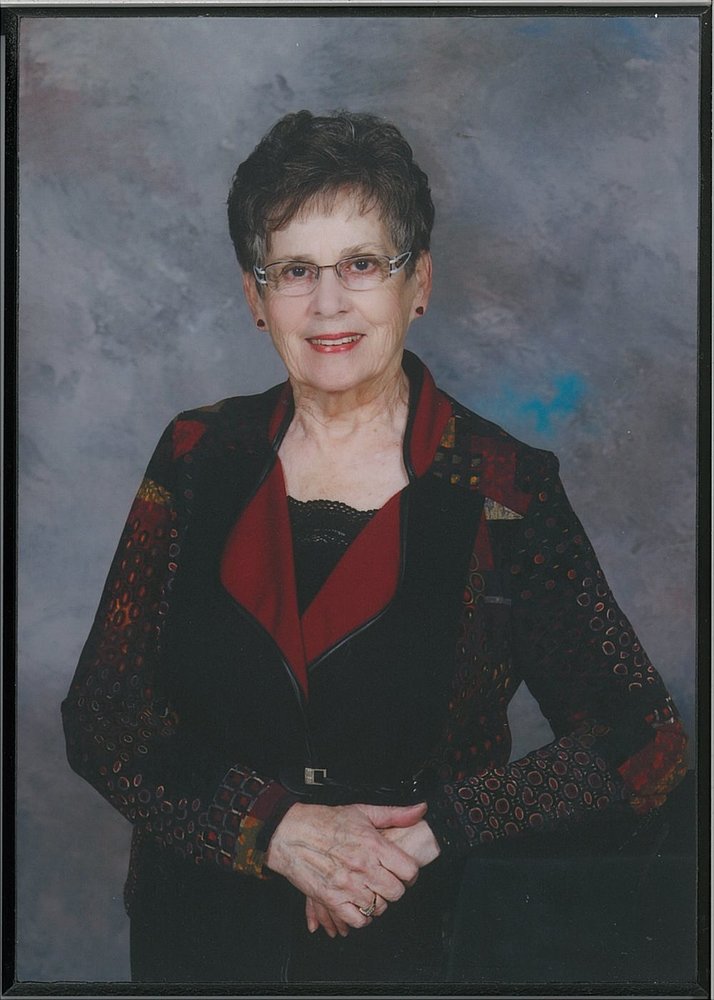 Elaine Meta Olson of Camrose, formerly of New Norway, passed away on Friday September 11, 2020 at the age of 81 years. She is survived by her two daughters Kristi Olson of Bittern Lake, Lynnette (Brett) Woodrow of Sherwood Park and granddaughters Brielle and Anikah Woodrow. She is also survived by her siblings Dean (Elsa) Hendricksen of Camrose and Kathy (James) Lee of Calgary and numerous nieces and nephews. Elaine was predeceased by her husband Lyndon Olson and her parents Harry and Gladys Hendricksen.

Elaine Meta (Hendricksen) Olson was born on July 20, 1939 in Brooks, Alberta in a small house as there were no hospitals in Brooks at that time. She was baptized in September at Bethany Lutheran Church in Tilley, Alberta. As she grew up in the community, Elaine attended Bethany School, Renfrew Junior High and Tilley High School.

In January of 1957, Elaine attended the Canadian Lutheran Bible Institute in Camrose, Alberta and returned to attend again in 1961. In between those years, she attended Henderson’s Business College and later worked at Alberta Government Telephones. In 1964, Elaine was introduced to Lyndon Olson who quickly became the love of her life and they were married on October 9, 1965. Two years later, their daughter Kristi was born in 1967 and their second daughter Lynnette was born in 1969. The family lived in Camrose until the fall of 1977, and then moved to an acreage near New Norway where they lived for many years. After Lyndon’s passing, Elaine moved to Camrose in 2014 and resided at Lakeside Village Condos.

Elaine was a very creative person and thoroughly enjoyed painting, weaving and gardening. She loved God’s creatures but had a special place in her heart for the many variety of song birds. Music was an important part of Elaine’s life as well. She sang in many choirs and enjoyed playing the piano in her free time. Elaine was an avid reader and enjoyed the challenge of a good jigsaw puzzle.

Elaine had a deep Christian faith. She shared openly her love for God and lived a life that extended joy, patience, kindness and gentleness to those around her. Elaine volunteered her time to serve in her community as well as in her church, Messiah Lutheran.

Elaine will be deeply missed by her family, her church family and her many friends.

A private family service was held. Interment has taken place in the Camrose Cemetery.

If family and friends so desire, memorial contributions are gratefully accepted to the Canadian Lutheran World Relief or to the Kidney Foundation of Canada.

Share Your Memory of
Elaine
Upload Your Memory View All Memories
Be the first to upload a memory!