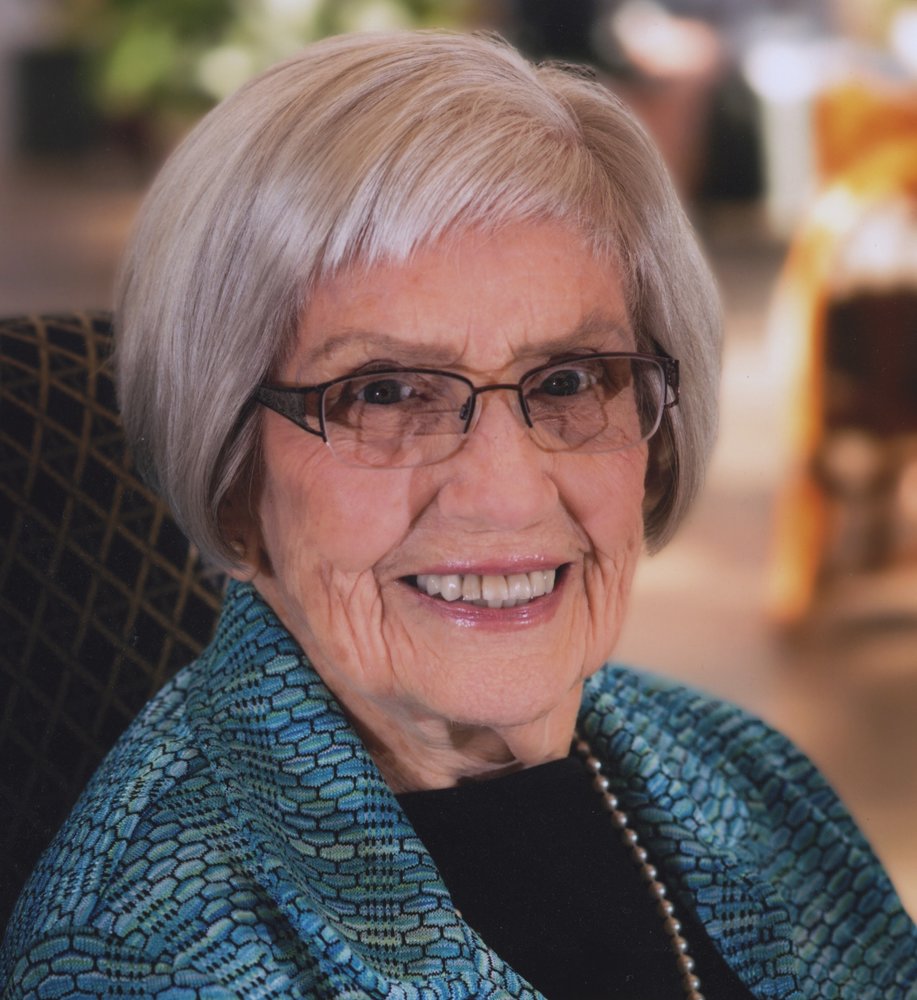 Jean was born in Rosalind, Alberta on January 19, 1918 to Fred and Margaret (Weller) MacDonald, the second of ten children and the oldest of the six children who lived to adulthood. In 1923, a schoolhouse was moved into Rosalind from George Orr’s farm and a second room was added, enabling Jean to start school. In the summer of 1928, the growing MacDonald family moved into their new home on the corner overlooking main street and the family’s general store. In 1934 Jean moved to Edmonton to complete Grade 12 at St. Mary’s, boarding with the nuns.

In 1935-36 Jean attended Camrose Normal School where she met Geoff Brimacombe. After graduating, she taught at various country schools: Union (near Vermilion), Sawyer (near Rosalind) and Daysland.

On March 25, 1940, Jean and Geoff married in Edmonton. Inasmuch as Geoff was teaching in Kelsey and Jean in Daysland, they met in Rosalind on weekends, when possible, for the remainder of the school year. Jean and Geoff had six children before leaving Rosalind in 1954. They moved several times over the years: Lethbridge, North Vancouver (where a seventh child was born), and Washington, Florida and California in the United States before returning to Alberta in 1974 and settling in Geoff’s hometown of Vermilion.

Jean and Geoff both returned to teaching and upgraded their education with Jean earning a B.Ed. when she was 61. After retiring in 1984, she and Geoff began wintering in Yuma, AZ. Following Geoff’s death in 1985, Jean moved to Camrose to be near her mother. In Yuma, she met David Scullion and they married on September 27, 1989. They continued to winter in Yuma and spent summers in Chilliwack, BC near David’s family. Following David’s death in 2003, Jean moved to Comox to be closer to her daughter, Margaret. She ended up living next door to her nephew Ken (Carol) MacDonald and enjoying many happy years.

Jean passed away September 3, 2020, after a fall and brief stay in hospital.

She is survived by her sons Neil (Linda) of Seattle, WA and Dan (Debi) of Scappoose, OR; daughters Judy (Ed Zilberts) of Walnut Creek, CA and Margaret (Dave McKeown) of Merville, BC; daughters-in-law Carol of Victoria, BC, Meg of Buderim, Queensland, Australia and Pat of Walnut, CA; brother Gordon (Adeline) and sister-in-law Karen of Camrose, AB. She adored her 10 grandchildren and 19 great-grandchildren, lighting up whenever the scattered family gathered, which was often. Extended family and friends, including many nieces, nephews, and cousins remained important to her throughout her life.

Jean will always be remembered for her warmth and kindness, positive outlook, steadfast love and support of her family, and her strong faith.

Due to Alberta Health Regulations, a private family service was held. Livestreaming will be available 11:00 a.m., Tuesday, September 15, 2020, please visit https://stfxcamrose.caedm.ca/ and scroll down to view.  Interment has taken place at the St. Elizabeth Roman Catholic Cemetery, Rosalind.

If family and friends so desire, memorial contributions in Mary Jean's memory may be made to W.F. MacDonald Family Fund C/O the Battle River Community Foundation,or to Cystic Fibrosis Canada.