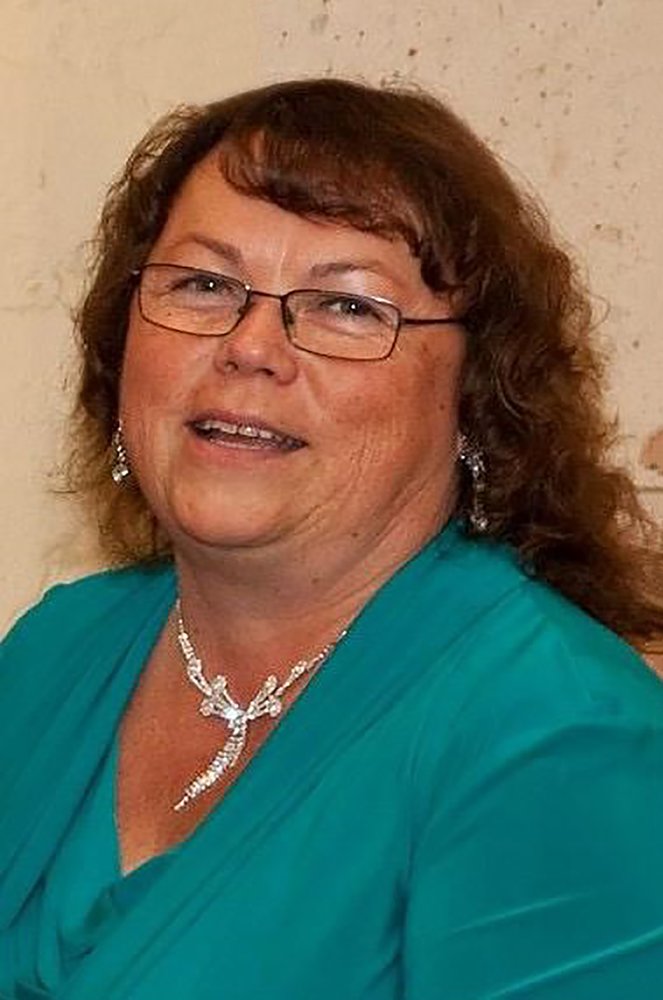 Debbie was born in Camrose, Alberta on June 22, 1957 and resided with her parents and four brothers in various towns throughout her childhood before settling in the Braim Subdivision just north of Camrose in 1965. She was the second child and only daughter to Oscar and Carmen Grundberg. She passed away at the Royal Alexandra Hospital in Edmonton on February 11th, 2020 at the age of 62 years.
Debbie kept busy on the acreage while growing up. She assisted in looking after her brothers, cooking, mowing grass, gardening, and babysitting for neighbors, friends, and family. She also enjoyed horseback riding until the very sad day when the horse was traded for a snowmobile.
During a shop dance one cold winter evening, a charming young man drew up the courage to leave; following a narrow trail through the trees and toward the home where Debbie was babysitting. It was during their conversation that night that Fred knew he was going to marry her. Over the next few years, they fell madly in love. Before they wed, Debbie publicly declared her dedication to her God when she was baptized on August 3, 1974. Fred and Debbie were married shortly thereafter on September 28th, 1974. They moved to Edmonton where Fred’s oilfield career would begin; and in 1978, with Katreena in tow and Robbie on the way, they followed opportunity to Fort St. John, BC. They would build a life here, staying thirteen years and adding Brendan and Michael to their growing family. Debbie enjoyed the home her and Fred built together and could be found busy working in the garden. She also spent time volunteering at the local school so she could be close to her kids. Regular visits from Debbie’s family, trips to Disneyland, skiing, and camping added to the cherished memories.
Debbie and Fred would return to their roots when they purchased a farm East of Hay Lakes. This is where they added Jeremy and Jonathan to their family. In 1999, Debbie cofounded Altek Supply with Fred and managed the financial and administrative duties for the next 17 years.

She enjoyed hard work and life on the farm. She loved relaxing evenings watching sunsets on the deck and especially loved it when the whole family got together for suppers.
In the last few years, Debbie and Fred enjoyed camping at the lake, sunset cruises on their pontoon boat, and traveling. Debbie’s travels took her to Lake Havasu, Arizona; Mexico; Turks & Caicos Islands, Disneyland with her grandchildren; and a trip to Bethel Headquarters in New York. A very special trip was to Costa Rica, where Debbie enjoyed spending quality time with the whole family. It was here that she even went zip lining through the jungle!
Debbie was known for her calm and mild spirit, her love for her family, and her love and respect for Fred. Debbie and Fred’s love for each other was obvious to everyone. They were known for holding hands, as it seemed their hands would inevitably always find each other’s.
Debbie showed enviable strength and selflessness during her struggle with cancer. As hearts broke around her, she assured the ones by her bedside that she loved them. One of the last things she said was a prayer. She thanked Jehovah God for the life she had and loved, his beautiful creations, her family, and the hope of eternal life in paradise; and she finished the prayer by asking that he strengthen and watch over her family. Even in her last moments, Debbie’s selflessness and love for her family was evident. She is a wonderful example to all who knew her.
Debbie is survived by her husband Fred of 45 years; children Katreena (Tyler) Lindberg, Rob (Heather) Atema, Brendan Atema, Michael (Jessica) Atema, Jeremy (Lacey) Atema, and Jonathan Atema; grandchildren Tanner, Ryder, Brodie and Scarlett; her mother Carmen Grundberg; and brothers Gary Grundberg, Glen (Leah) Grundberg, Chris Grundberg and Sister-in-law Cheryl Grundberg. Debra was predeceased by her father Oscar Grundberg; and brother Dale Grundberg.

If family and friends so desire, memorial contributions in Debra's memory may be made to the Kingdom Hall of Jehovahs Witnesses or to the Stollery Children's Hospital or to S.T.A.R.S. Air Ambulance.

Share Your Memory of
Debra
Upload Your Memory View All Memories
Be the first to upload a memory!
Share A Memory
Send Flowers