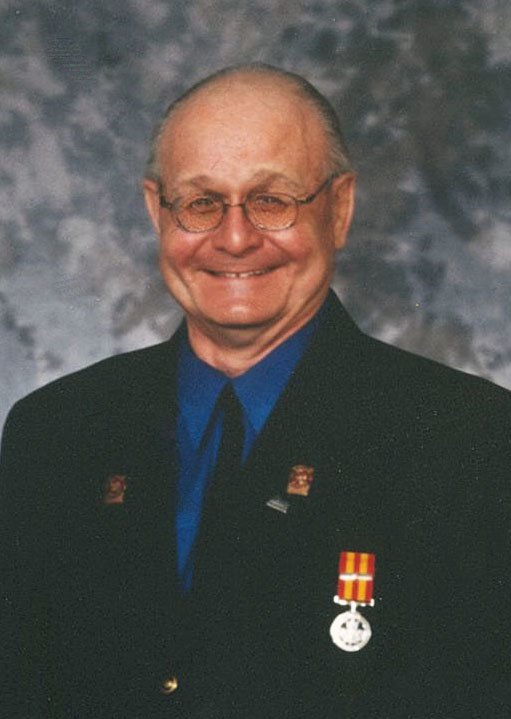 John was born in Camrose on September 12, 1932 to John and Julia Klug.  As the middle child he had an older brother Henry and younger sister Irene.  He is survived by his three nieces, Diane Klug, Shelley (Doug) Moch, and Linda (Terry) Feindel as well as three great-nieces, Kelsey Moch and Madison and Taylor Feindel.  He was predeceased by his parents, his brother Henry, sister Irene Jones, and two brothers-in-law Gordon Case and Edward “Sam” Jones.

John attended the local schools and then went to Calgary to obtain his Journeyman Mechanics license.  Upon completion he joined his father and Henry in the family business, J. Klug and Sons.  The three of them worked together until his Dad’s untimely passing in 1959.  His brother Henry then opened Klug’s Garage and once again the brothers worked side by side until John developed allergies to exhaust.

John left the mechanics trade and became a bus driver; and for 25 years he worked for the Separate School Division transporting kids to school and on field trips.  During this time he and his mother also became custodians of both St. Patrick School and OLMP.  They cleaned both schools for a number of years until finally devoting all their time to St. Pat’s which was just up the street from where they lived.

As well as having three mechanics in the family, John also carried on the tradition of having members of the Klug family volunteering for the Camrose Fire Department.  In 1958 he joined alongside his dad and Henry, wearing #23 and retiring in 1989 as a Captain.

John was an avid bowler in his time with many trophies and awards to his credit.  He loved fishing and making flies as a pastime.  Many camping trips were made with his mother, Henry, Irene and Sam.  Several of those trips included his nieces who will always cherish those memories.  He became a very good cook over the years and mastered the 3 Day Pickle.   If the food was good, he called it “Gooder Stuff”.

After losing his mother in 2006, John started to slow down.  To keep him active, he was enlisted as after school care for his great-niece Kelsey.  Together they would watch TV, take short trips and best of all see what was available in the pantry or fridge.

In May of 2017, John became ill and required additional care.  He was diagnosed with Dementia and moved to Faith House in October of that year.  The following April he fell and cracked his hip placing him in hospital for about a month.  Bethany Meadows then became his home until his peaceful passing with his family at his side.

He was a kind man, who loved to laugh, was devoted to his family, loved hugs and will be forever loved and missed.

If family and friends so desire, memorial contributions in John's memory may be made to Alzheimer Society of Alberta, or to the Bethany Group.

Share Your Memory of
John
Upload Your Memory View All Memories
Be the first to upload a memory!
Share A Memory
Send Flowers