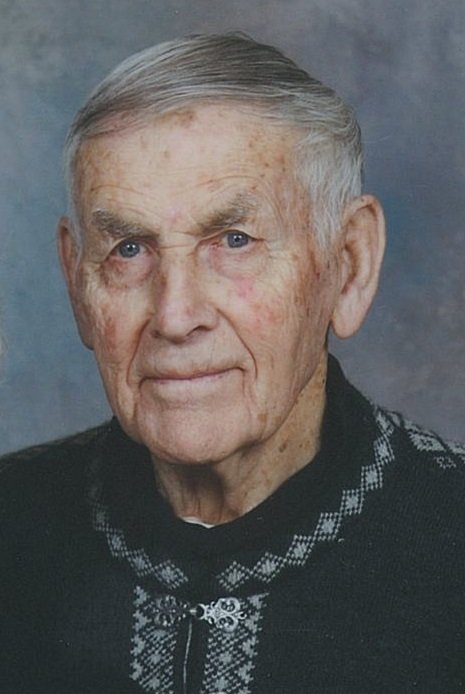 Please share a memory of Clarence to include in a keepsake book for family and friends.
View Tribute Book

Clarence Lloyd Servold of Camrose, Alberta, passed away on Saturday, February 2, 2019 at the age of 91 years. He was born to Hans and Anna Marie Servold (Norwegian immigrants) in St. Mary’s Hospital on March 28, 1927. His family lived near Camrose Lutheran College where his parents met. He often recounted how blessed he was to live near the creek valley where countless hours were spent playing and exploring with his brothers.

Clarence enjoyed a few sports throughout his lifetime such as baseball, golf, and hockey, but his passion were the Nordic sports of cross country skiing and ski jumping. This amazing athlete became a two-time Olympian, competing in the Winter Games in Cortina, Italy, in 1956 and in Squaw Valley, California in 1960. Clarence had accepted a scholarship to Denver University where he very successfully competed for the ski team, making U.S. college history while earning a Civil Engineering degree. Later, he would stay involved in an advisory capacity for Nordic sport worldwide.

In September of 1958 Marjorie Webster became his beloved bride; they became proud parents to four children and were happily married for over 60 years. Clarence pursued a career in civil engineering, which took the family to the Town of Innisfail for a little over a decade, following which he owned businesses in Edmonton and Camrose.
Other interests included boating, building, travelling, family gatherings, grandchildren’s events and games, compiling Nordic ski history, and water color painting. He loved talking to people and sharing stories. Faith in God through Jesus was very important to Clarence; he wishes all to come to this saving knowledge. We were so privileged to share our lives with this unique, steadfast, humorous, highly gifted man who was well-liked and respected.

A Funeral Service was held at 1:00 p.m., Saturday, February 9, 2019 from the Messiah Lutheran Church with Rev. David Ericksson and Rev. Bev Swanson. Interment has taken place in the Camrose Cemetery.

If family and friends so desire, memorial contributions in Clarence's memory are gratefully accepted to Messiah Lutheran Church, CLBI, or to the Camrose Ski Club.

Share Your Memory of
Clarence
Upload Your Memory View All Memories
Be the first to upload a memory!
Share A Memory
Send Flowers
Plant a Tree