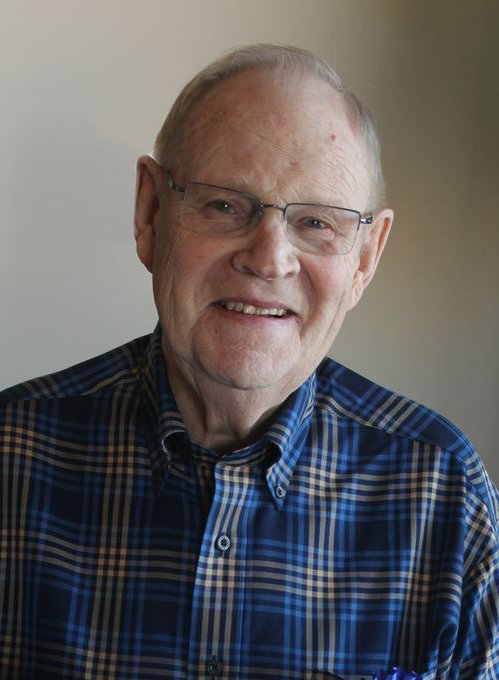 Rodney Orlando Madison was born at home in Camrose to Gina and Ole Madison on January 28,1934 and passed away on his eighty fifth birthday.

He was the youngest of a family of eight children. The home Rod grew up in was next door to Camrose Lutheran College. He spent many hours on the hills building forts with his brother Lon and skating on the creek. He told of watching the soldiers training at the Drill Hall during WWII. Cars were always a passion of Rod’s and he was meticulous about his vehicles. In later years, he and Vi enjoyed many hours of motorbiking and camping in their motorhome. Rod was employed in the automotive business as Parts Manager and in Sales at the Chrysler Dealership. In his mid-twenties, Rod owned the local Shell Service Station. In the 1960s, he became involved with Burgar Funeral Home where he took great pride serving the public with compassion and integrity. Rod served on several civic boards and committees, including the Camrose City Planning Commission, Bethany Board, Centra Cam and the Alberta Funeral Service Association Executive.

He will be remembered lovingly by his wife Vi, and family Lori (Kevin) Lindholm, Reg (Barbara) Madison and Greg Madison, seven grandchildren and nine great-grandchildren.
He is reunited with his parents, sisters Van Carr, Ruth Archibald, Doris Ofrim, and brothers Webster, Roy, Morris and Lon.

A Funeral Service was held at 11:00 a.m. February 1, 2019 from Messiah Lutheran Church, with Rev. Calvin Skriver officiating. Interment has taken place in the Camrose Cemetery.

If family and friends so desire, memorial contributions in Rod's memory may be made in lieu of flowers to the Arthritis Society, the Hospice Society of Camrose and District, or to the charity of one's choice.

Share Your Memory of
Rodney "Rod"
Upload Your Memory View All Memories
Be the first to upload a memory!
Share A Memory
Send Flowers