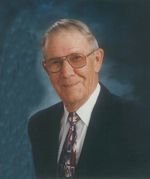 James Leonard Lindholm was born on March 18, 1925 on his parent's farm near New Norway, Alberta. He was the oldest of three sons and one daughter. James spent his growing up years on the family farm with his parents Albin and Elsie Lindholm, and his brothers Grant and Howard. He married Lois Malmo on June 15, 1947, and they took up residence on a farm near New Norway. James was active in community organizations such as New Norway Mutual Telephone, Home and School, and had a strong involvement in the curling club. He loved curling, and had a huge interest in the hobby of photography. James and Lois had six children: Marlene (Richard) Edwards, Gordon (Cathy) Lindholm, David (Fern) Lindholm, Kevin (Lori) Lindholm, Susan (Barry) Archer, and Dean (Shannon) Lindholm. James took great pride in his children's activities, and was a strong voice of encouragement in their lives. James always took an active interest in the lives of others, and always had time to talk and have coffee. He was fondly regarded by his many nieces and nephews as well, and he took a genuine interest in their lives. In his later years he gained 22 grandchildren, and 15 great-grandchildren. He was always happy to see them, and loved playing a round of crib with them. He took an active and proud interest in their lives as well. James and Lois moved to Camrose in 1980. For a number of years he enjoyed driving a Pilot truck for Dennis Willson, piloting Wheatland Bins, which he thoroughly enjoyed. Other activities he enjoyed in his retirement years were golfing, playing pool at the Senior Center, and coffee times with friends at Tim Hortons. James was a man of integrity and strong family values, with a sense of humour, tremendous patience for others, and a generous spirit. He will be greatly missed, and fondly remembered. He was predeceased by his parents, Albin and Elsie, his sister Gladys in infancy, and his brother Grant. Funeral services were held on Monday, June 2, 2008 at 2:00 p.m. from Century Meadows Baptist Church with Rev. Ron Swanson officiating. A private family inurnment was held prior to the service in the New Norway Cemetery. Memorial contributions are gratefully accepted to St. Mary's Hospital Palliative Care, or to the charity of your choice.

A Memorial Tree was planted for James
We are deeply sorry for your loss ~ the staff at Burgar Funeral Home Camrose Ltd.
Join in honoring their life - plant a memorial tree