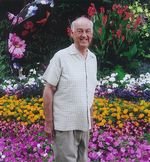 Donald was born October 9, 1943 and passed away May 23, 2008 as a result of a stroke. He was born in Vegreville but grew up and went to school in Hairy Hill. After graduation he went to NAIT studying Business Administration. He worked briefly in Kamloops, B.C. for Woolworths and then came back to Alberta and worked for MacLeods for almost 25 years. He started in Boonie Doon and moved on to St. Paul, Vegreville, Grande Prairie and Camrose. Don married Phyllis on May 4, 1968. They were blessed with two children, Anastasia (Reg) Hendryanto of Calgary, and Michael of Camrose. Don is also survived by his brother Ken of Houston, Texas, and numerous Aunties and cousins. He was predeceased by his parents Orest and Jennie, and sister Susan. Don loved to travel and was looking forward to going on an Alaskan Cruise and to Houston to see his brother's place. He was also a very good shopper and went for coffee with his friends faithfully. A Funeral service was held on Friday May 30, 2008 at 1:00pm from the Burgar Memorial Chapel with Rev. Brian Hunter (St. Mary's Hospital Pastoral Care) officiating. Inurnment will be followed at a later date at Boian, Alberta. In Lieu of flowers, memorial contributions may be made in memory of Don to the Canadian Kidney Association, The Diabetes Association or to The Alberta Heart and Stroke Foundation.

A Memorial Tree was planted for Donald
We are deeply sorry for your loss ~ the staff at Burgar Funeral Home Camrose Ltd.
Join in honoring their life - plant a memorial tree